Pre-sales for condominiums in The Maples, a Federalist Era Washington, D.C., mansion originally built by William Mayne Duncanson, have reached 70 percent according to the property’s exclusive sales and marketing firm, Urban Pace. 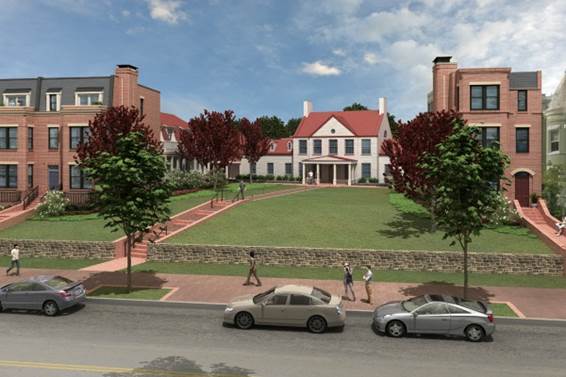 Washington, D.C.—Pre-sales for condominiums in The Maples, a Federalist Era Washington, D.C., mansion originally built by William Mayne Duncanson, have reached 70 percent according to the property’s exclusive sales and marketing firm, Urban Pace. Pre-sales have averaged a neighborhood record $725 per square foot, which is about $200 per square foot more than initially expected.

The developer for the project, Altus Realty Partners, has been revamping the site since it acquired the  historic property in 2010. The nearly completed renovation includes a restoration of the primary structure’s Georgian façade and adding support to the building’s foundation to allow for the addition of a new underground garage. Once completed, the property will feature 19 residences that are spread across six different buildings, which includes former stables, later additions and three newly constructed townhomes that have been transformed into a mix of flats and duplexes. The new townhomes are offered in four and five-bedroom floor plans.

Each residence offers a distinct floor plan options and many of them have direct elevator access to the parking garage.

Prior to the Altus acquisition, the property was known as the “Friendship House,” and was placed on the National Register of Historic Places in 1973. The original owner, English merchant William Mayne Duncanson, regularly entertained some of the most well-known names in American history, including George Washington, Thomas Jefferson. Francis Scott Key, composer of “The Star Spangled Banner,” also owned the property at one point.