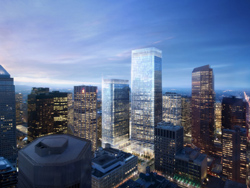 Calgary—Brookfield Office Properties Inc. has begun construction on the first phase of the $1.3 billion Brookfield Place Calgary office complex in the city’s downtown core. Slated to rise at the former site of the Calgary Herald building, the approximately 810-foot east tower will be the tallest structure in Western Canada.

Upon completion during the latter half of 2017, Cenovus Energy will anchor the 1.4-million-square-foot building. The company is expected to occupy one million square feet of office space by the first quarter of 2018.

“Several years ago we identified this block as the best-located parcel of underdeveloped land in the city, and today we begin construction on what will be the tallest structure in Western Canada,” Jan Sucharda, president and chief executive officer of Brookfield Office Properties’ Canadian Commercial Operations says. “Getting to this day, where the dream becomes reality, was only possible thanks to the hard work and support of so many, including His Worship Mayor Naheed Nenshi, our partners at Cenovus, and my colleagues at Brookfield.”

Brookfield also announced that the pavilion space adjacent to the new tower will be named ‘The James K. Gray Gallery’ after the influential and revered member of Western Canada’s oil and natural gas exploration business.

The company is also planning to develop a second office tower at the full-block site bordered by 1st and 2nd Streets S.W. and 6th and 7th Avenues S.W. The building will offer approximately one million square feet of space, a 60-foot-high transparent glass pavilion, restaurants, retail shops, street-level amenities and an underground parking structure with 1,100 parking stalls.

Upon completion, Brookfield Place Calgary is expected to offer the highest quality in urban real estate for office space, dining, retail and the arts. Other ‘Brookfield Place’ branded projects around the globe are located in Toronto, New York City and Perth.

In Calgary, Brookfield is among the largest office landlords with a portfolio of eight assets totaling 6.8 million square feet. The properties are 99.7 percent leased with an average lease term of 11.2 years.