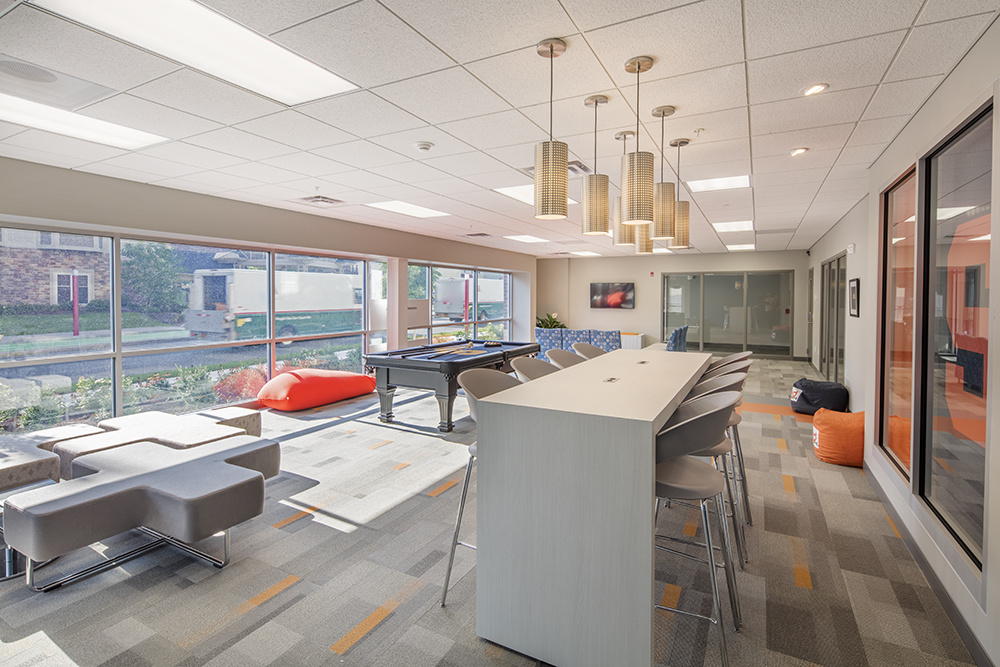 Built on a 28,000-square-foot, slightly less than half-acre parcel, the six-story building encompasses more than 78,000 square feet. Three Syracuse University alums spearheaded the development team that turned their long-held dream into reality. “When we were in Syracuse—I graduated in 2006—there was no purpose-built student housing,” Jared Hutter, Englewood Cliffs, N.J.-based BLVD Equities founder and managing principal, told MHN. The project was built as a joint venture between BLVD Equities and Rosen Property Group.

“I talked with friends at other universities, including Maryland and Indiana, that had that type of student housing. While those schools are larger than Syracuse, at the top the demographics are much the same. [BLVD partner] Michael [Edelman], my roommate at the time, began talking about coming back and doing this. It took us 10 years and in that time, three other [purpose-built] projects got built, which made us realize our premise was right. But with the size of the market, there were still opportunities.”

The third member of the team was Brian Rosen, who heads Rosen Property Group.

The development team members did not intend to sell their recently-built development so rapidly, Hutter recalled. “We felt we would own it for some time, but when the biggest guys in the country come knocking, we felt it behooved us to listen,” he recalled.

“And after hearing from them and looking at what our prerogatives were moving forward, ultimately, it made sense for us as principals and for our own investment group to take some chips off the table and put us in a position to push forward with additional projects.”

When considering the site, the development team was most attracted to its campus proximity, Hutter recalled. “The location was phenomenal,” he reported, adding that although a building already existed on the site, that structure was vacant. “There were no tenant issues and we were able to push forward quickly. But while it was a good site, it wasn’t a very big site, forcing us to go vertical. If it had been larger we would have had more area to work with.”

The developers faced two significant challenges. The first was their status as out-of-town developers, which called for the creation of a team with boots on the ground on site that could execute their wishes, Hutter remembered. The second was that they had no experience in building student housing, which called for navigating through a learning curve.

“We ultimately found a phenomenal ground team that I would love to work with again,” Hutter said. “But we had never done this before. We had never built a student housing community before and that affected us from the standpoints of both construction and operational considerations. We needed to understand what the ultimate student desires would be and how those would translate into the design of the building. And on the pro forma side, we needed to understand what the operation of a student housing community would be; it was more management intensive than anything any of us had been involved with before.”

Hutter reported that in the final analysis, he was most excited about one building feature: the inclusion of basement-level individual and group study rooms. “We wanted to find a way to harvest the academic culture and encourage students to thrive academically,” he said.