The London Borough of Hammersmith and Fulham planning committee recently approved a revised masterplan submitted by Stanhope and Mitsui Fudosan for the BBC Television Centre. 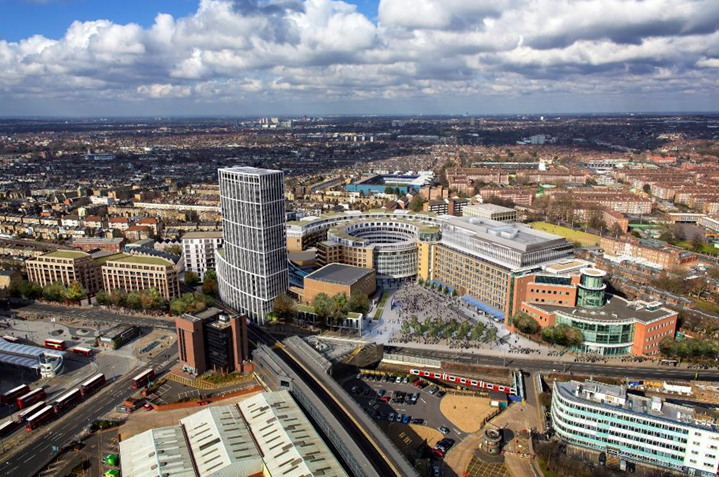 London—The London Borough of Hammersmith and Fulham planning committee recently approved a revised masterplan submitted by Stanhope and Mitsui Fudosan for the BBC Television Centre. Submitted in May 2014, the redevelopment plan calls for a mix of residential, office and hotel uses for the 54-year old site.

Located at White City in West London, the BBC Television Centre served as the headquarters of BBC Television from 1960 to 2013. A joint venture between Stanhope, Mitsui Fudosan and the Alberta Investment Management Corporation (AIMCO) purchased the 14-acre property in 2012 at a cost of more than $300 million. Allford Hall Monaghan Morris (AHMM) is the architect of record for the redevelopment, with additional input from Duggan Morris and Maccreanor Lavington. Mace Group Ltd was selected as general contractor for the $600 million project.

“Over the last year, we have been working very constructively with Hammersmith and Fulham Council and the BBC to realize our vision for Television Centre as a new center of gravity in west London,” Alistair Shaw, Stanhope’s Managing Director of Television Centre said in a statement. “We will now be getting on with bringing forward an exciting development of these fantastic and much loved buildings in the creation of a great place to live, work and visit as part of the regeneration of the White City area.”

The redevelopment plan for the 2.3-million-square-foot property includes a new Soho House club, 1,000 residential units, a boutique hotel and two office buildings, as well as a plethora of restaurants, shops and cafes at ground level. According to AHMM, the Television Centre forecourt and façade, Studio 1 and the central Helios Plaza will be preserved, in an attempt to retain the historic heritage of the site.

BBC subsidiaries BBC Studios and Post Production and BBC Worldwide will move back into the new offices in 2017, the deadline for the first phase of redevelopment. The master project is slated for completion by 2020.