3 ‘Must Do’s’ for Converting Historic Buildings into Affordable Housing

The current economy encourages nonprofit housing developers to convert historic buildings into affordable homes. Frances Ferguson, vice president of real estate programs at NeighborWorks America, shares some tips on how to avoid the main obstacles in doing so.

However, developers who forge ahead to convert old buildings into vibrant and healthy new homes will more than likely succeed if they start the process early, generate political support along the way, and relentlessly seek out the financial resources to do a project the right way.

It’s never too early to start. Consider the timeline that Better Housing Coalition (BHC), Richmond, Va., is working with as it redevelops an historic community building that was once a school. Purchased in 2015, BHC held a series of 15 meetings with residents and neighbors living near the building, and the feedback was initially positive according to the organization’s CEO Greta Harris.

However, as the process moved forward and more detailed redevelopment plans were presented, neighborhood resistance emerged, especially to the idea that the building would be converted into affordable housing.

“At that point there was considerable pushback—on the design, as well as resistance to the concept of affordable housing. To accommodate some of the neighbors’ issues, we made numerous revisions to the design and site plan over the course of six months,” Harris said.

After listening to the community and making adjustments where feasible, the project is moving forward, but is some time away from completion, underscoring the importance of starting early.

Brad Hunsberger, vice president for real estate development at La Casa, a Goshen, Ind.-based developer echoed Harris’ guidance. “The single best advice for the process is to engage early and often with all the stakeholders. Start with city staff but quickly move on and present your plan to the neighborhoods adjacent to the building (being reused).”

Although every project and community are different, it makes sense to expect a time line of at least two years. These kinds of projects often take longer, and cost more than anyone first anticipates Harris noted.

Public financial support—and sometimes political will—to help acquire properties and offset total development costs is crucial in seeing projects move from idea to reality. Additionally, without endorsement from the local representative, a project has little chance of moving forward, particularly if there are zoning changes needed.

For example, local rules often require a defined amount of parking per housing unit or retail space, which can add significantly to the cost of a project. For RUPCO, an affordable housing developer in Kingston, N.Y., coming to an innovative solution to parking with the local government helped it create mixed-use living and work space for its award-winning Lace Mill project.

“Parking was a sticking point for the Lace Mill to move forward as we envisioned,” said Kevin O’Connor, CEO of RUPCO. “We were able to proceed after submitting a plan to the municipal Planning Board that removed traditional curbside parking and created head-on parking directly off the street, which allowed us to create a couple extra spaces and preserve valuable green space for the neighborhood.”

Keep in mind, however, success with one project within a jurisdiction doesn’t automatically lead to success with another in the same area. The rezoning process can be time consuming, costly and contentious.

Time is money, and even an early start may not be enough to navigate unexpected resistance from either the community or government.

Building affordable housing of any kind involves putting together several pieces of financing, but it seems like financial jiu-jitsu is necessary when gathering the money to pay for the reuse of historic buildings.

“Available capital is a huge factor in adaptive reuse as it is, by nature, more expensive,” said Sam Erickson, COO of Community Housing Initiatives, Des Moines, Iowa, and acquiring the necessary capital could test even the most committed developer. 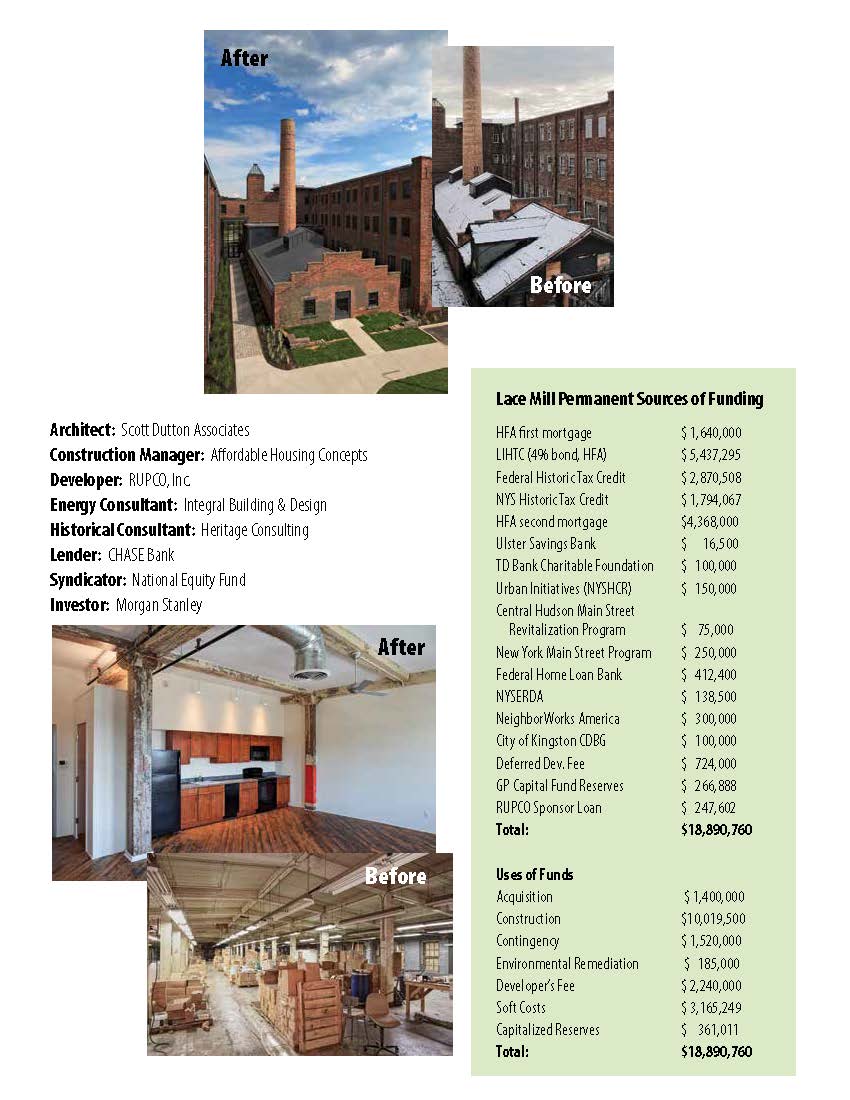 RUPCO’s Lace Mill project is just one example. “We knew that we’d need a number of different grants to move the Lace Mill project ahead, but the idea of 17 separate pieces of financing never crossed my mind,” said O’Connor.

Fortunately, developers can tap into a variety of resources to get a deal financed, including funds specifically set aside by states for the reuse of historic buildings. CHI’s Erickson noted that she would not be able to develop historic re-use projects without the state’s help. Iowa is among the 34 states that provide dedicated historic tax credits, according to the National Trust for Historic Preservation.

These multiple sources of financing are critical because historic buildings have features and details that are often cost-prohibitive in today’s financing environment, said Erickson. Although the up-front cost of reuse can be prohibitive without multiple layers of financing, there are unexpected cost-saving benefits that may accrue to the developer.

“Preserving a beloved structure in the community maintains a source of local pride and irreplaceable architectural fabric,” he said. “At CHI, we’ve found residents of our historic buildings take great pride in living there; we see lower turnover and significantly less damage in historic buildings than in our new construction projects.”

Repurposing historic buildings takes planning, financial ingenuity and cooperation from expected and unexpected parties, but in the end the effort is worth it. Harris of BHC described the process this way: “Would we want our mom to live there? If the answer is absolutely yes, then we’d move forward.” 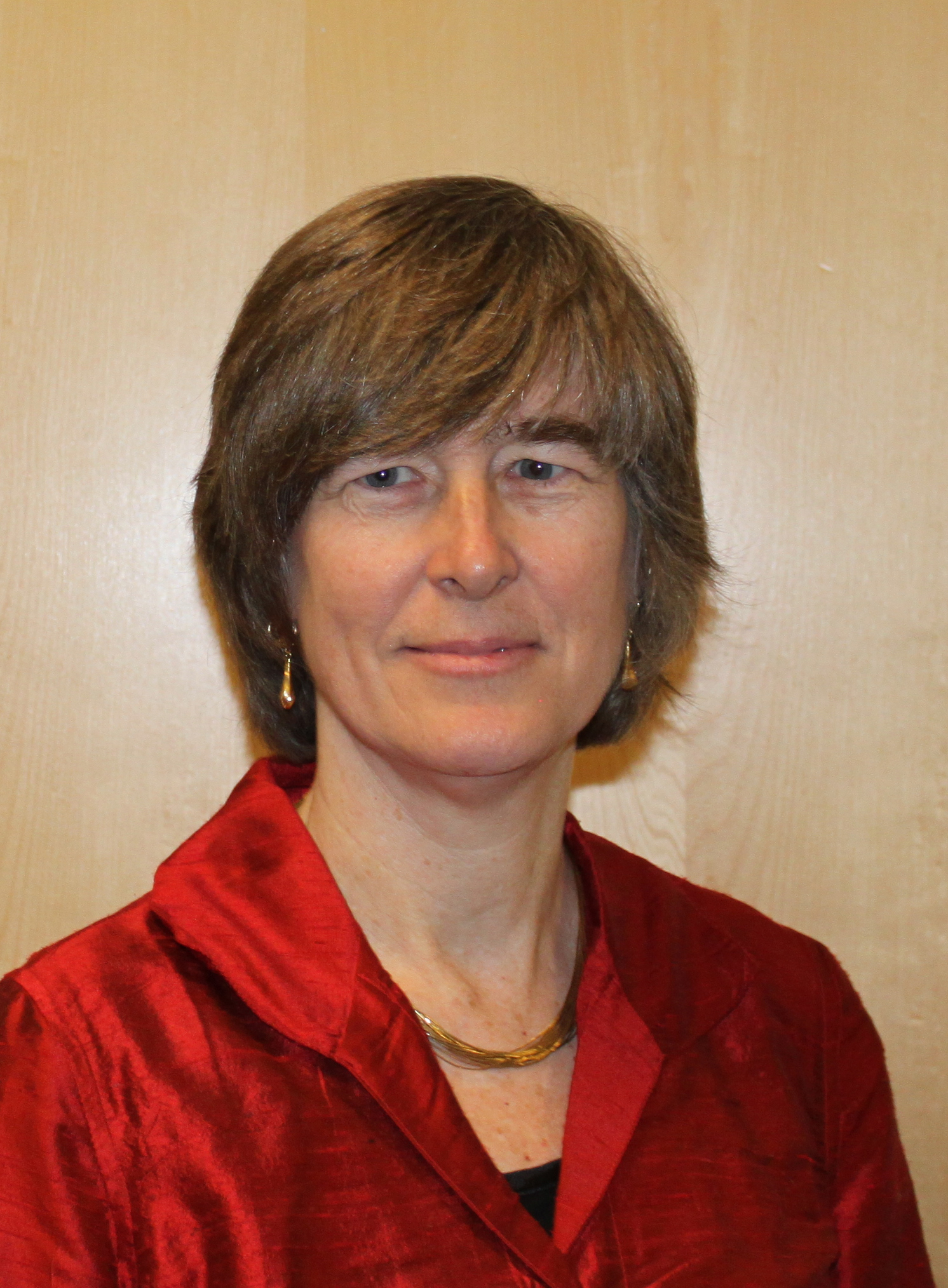