Work has started on Wynwood Central, a mixed-used project in the Wynwood district of Miami. 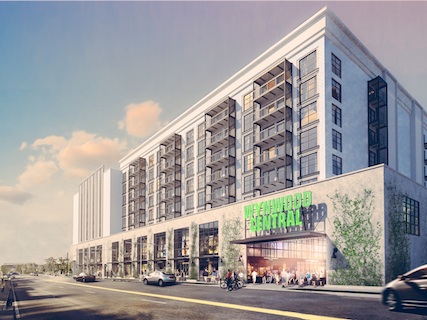 Miami—Work has started on Wynwood Central, a mixed-used project in the Wynwood district of Miami. The 385,000-square-foot development will include 69 residential units, along with 40,000 square feet of retail, plus 50,000 square feet of office, showroom, and other commercial space marketed to Miami’s tech, arts, and design sectors.

The eight-story atrium building will consist of three floors of retail and other commercial space, as well as two neighborhood firsts: a parking garage with 420 covered spaces, and a rooftop pool and bar. According to the developers, South Florida real estate pros Marc Kovens and Shawn Chemtov, the residential units are designed to appeal to the creative and technology communities, with five floors of live/work units featuring two- and three-bedroom apartments from 1,250 to 2,500 square feet.

Wynwood Central is located between NW 24 St. and NW 25 St., just west of the area’s main thoroughfare, NW 2 Ave. The project is expected to be completed by mid-2015. It was designed by Bloom Miami and DNB Design Group, who consulted artists, local business owners, and others in its creation.

Originally a garment district, the Wynwood neighborhood has more recently evolved into a center for various creative businesses, including tech and art galleries. Ten years ago, there were only a few art galleries, a modest monthly art walk, and streets characterized by warehouses, many of which were abandoned. Now Wynwood sports one of the largest open-air art galleries in the world, featuring murals and graffiti art in various places, and a variety of galleries, shops, restaurants and bars.

In fact, when the perimeter of the Wynwood Central development site was established in November, the developers tasked a group of local artists to create murals for area around the perimeter. The artists, from the Wynwood Central Artist Collective, included Daniel Fila (a.k.a. Krave), Yuval Ofir, Ruben Ubiera, Monz, Kazilla, Eddie Mendieta, Jay Bellichi, Rei Ramirez, Phil Fung, and Arnaud Pages.