The White Plains Housing Authority in partnership with Jonathan Rose Companies has broken ground on a $42.18 million affordable housing community, The Prelude, in the first phase of efforts to revitalize at the Brookfield Commons campus in White Plains, N.Y. 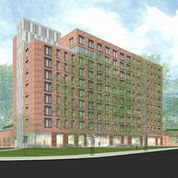 White Plains, N.Y.—The White Plains Housing Authority in partnership with Jonathan Rose Companies has broken ground on a $42.18 million affordable housing community, The Prelude, in the first phase of efforts to revitalize at the Brookfield Commons campus in White Plains, N.Y.

The groundbreaking was held on April 11 and was attended by Jonathan Rose, president of Jonathan Rose Companies LLC, Mack Carter from the White Plains Housing Authority, White Plains Mayor Thomas Roach and several other officials.

“The White Plains Housing Authority and the City of White Plains have given us a great opportunity to help transform Brookfield Commons into a thriving green mixed income community,” Rose says. “With its superb location, near the Metro North Train Station, shopping, White Plains Hospital and the burgeoning Mamaroneck Avenue, all of the elements are there to create a community of opportunity.”

The Prelude will be located on the corner of South Lexington Avenue and Quarrapas Street and will add 104 new affordable housing units to that market in addition to 13,500-square-foot community center. The Brookfield Commons Campus, formerly known as Winbrook Campus, already contains 450 public housing units and was built in 1949.

The Prelude is the first phase of the redevelopment and future phases will work to replace the aging structures with green mixed-income buildings. Development of the phases is structured to keep residents from having to move off-site.

The project will be constructed to meet Enterprise Green Communities standards for energy efficiency and healthy environments and, once complete, will partake in New York State Energy Research and Development Authority’s (NYSERDA) Multifamily Performance Program, which provides per-unit financial incentives for multifamily buildings that reduce energy consumption. The building is expected to reduce residents’ projected energy use by 15 percent.

Financing for the project has been provided by numerous sources including the New York State Housing Finance Agency, the Division of Housing and Community Renewal, Westchester County, Bank of America, the City of White Plains, NYSERDA and the U.S. Department of Housing and Urban Development.

“This project is great for the city and most importantly our residents. We’re providing them with new, modern housing and it removes the stigma of public housing,” says Carter, executive director for the White Plains Housing Authority. “This redevelopment project ultimately will allow us to increase the number of affordable housing units on the site and improve the quality of living for our residents at a time when many other housing authorities throughout the country are struggling or even failing to meet the basic needs of its residents.”

The 104 units at The Prelude will comprise 34 one-bedroom, 44 two-bedroom and 25 three-bedroom units and a super’s unit will be included on nine of the building’s 10 stories.  Construction is scheduled to be completed by summer 2015.