What’s Next for Multifamily: Q&A with Kevin Finkel of Resource Real Estate

The executive vice president talks trends and fundamentals as 2016 comes to a close.

With only two months left, 2016 has been an interesting year for multifamily. Though the market has been quite steady overall, there were micro-trends in certain metros as a result of various economic factors. For example, sales in New York took a dive during the summer, while Houston is on track to receive a historically low amount of new Class A supply in the next couple of years because of the drop in oil and gas prices.

For a peek into 2017, MHN turned to Kevin Finkel, executive vice president of Resource Real Estate. The real estate professional talked about the trends and challenges to expect from next year.

MHN: What do you think will be the main driver for multifamily demand in 2017?

Kevin Finkel: The main reason we expect to see sustained multifamily demand is very simple: there are just not enough apartments. This chart (see chart below) shows the number of apartments built every decade and the U.S. population. In the 70s and 80s, there was an apartment building boom that tracked population growth, but in the last 30 years, even though the population kept growing, we saw about half as many apartments being built.

So, we have an undersupply of apartments relative to the population and we also see demand growing. As the economy improves, for example, we see more and more millennials moving out of their parents’ homes and looking for apartments. If we see the economy continue to strengthen, the mismatch between supply and demand will get even worse.

MHN: It seems that construction costs will remain high. Do you think the lending policies for new multifamily construction will be less tight next year, considering the high demand?

Finkel: We believe that financing for ground up development will be tougher to come by in 2017, because the vast majority of these types of loans come from banks. Banks have become much more conservative with this type of loan as they face higher capital reserves for construction loans. In addition, most lenders believe that we are in an environment of slight oversupply in some major markets for Class A properties, hence more reason to tighten down on credit and lending. 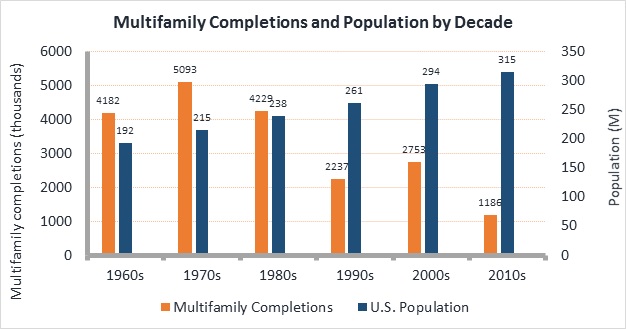 MHN: Do you think that alternative lenders will gain a more significant share of the market?

Finkel: We have seen a number of non-bank type lenders enter the construction space. As more traditional lenders scale back and traditional sources of financing become scarcer, non-bank lenders are moving into the real estate space, deploying capital into construction loans and usually getting paid a premium.

MHN: Will 2017 mark the rebirth of the city urban center? Will we see more Millennials and Baby Boomers moving back from the suburbs and compromise on space for better amenities and services?

Finkel: We think that there’s an ongoing trend of young, creative, educated people moving to city centers. For those people, there are plenty of new luxury apartment developments in downtown areas. However, the desire to be in suburbs with good schools, low crime and easy access to city centers is equally as important of a driver of the market. People with families want to be in those neighborhoods and that is going to be a very important driver of the multifamily market because there is an undersupply of apartments in those areas.

MHN: How will these moves influence the multifamily market?

Finkel: First, it’s important to understand that not everyone is moving. We see young, creative, highly educated people who have good jobs moving to city centers and they’re looking for Class A, luxury downtown apartments. But there are many people, especially working people with families, who want to be in the suburbs, where there are good schools and low crime rates. For these people, the challenge is finding quality apartments that they can afford. No one is building those apartments right now.

MHN: What are the main trends in multifamily that will rule the market in 2017?

MHN: What should we expect in terms of challenges?

Finkel: The main challenge is that there are just not enough affordable apartments being built. There is no incentive for developers to build apartments for the middle-market, either from market forces or from government incentives, so mid-market apartments are not being built. At the same time, there is enormous demand for mid-market apartments being driven by young people and the workforce. This imbalance will be the main challenge for the multifamily market in 2017 and beyond.