Developed by Wood Partners, Alta Roosevelt was the largest multifamily property in the Midwest at the time of completion. 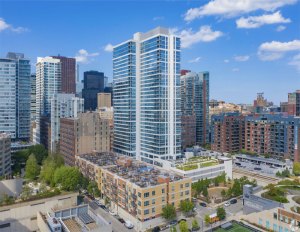 The Elle. Image courtesy of Waterton

Waterton has expanded its Chicago multifamily holdings with the acquisition of Alta Roosevelt, a 33-story, 496-unit apartment property in the South Loop, from Wood Partners for $170 million.

The firm, which now has more than 6,700 multifamily units in the Chicago metro, has rebranded the property at 801 S. Financial Place as The Elle.

Crain’s reported the price and also the news that the sale came several months after an earlier agreement for Atlanta-based Wood Partners to sell the asset to a joint venture of American Landmark Properties and Evergreen Real Estate Group for $180 million did not happen. The details on why that deal fell through were not disclosed.

Even with the lower price, the amount paid for the high-rise apartment community is still on track to be the biggest individual multifamily transaction of the year in the Chicago market.

Julie Heigel, senior vice president of acquisitions at Waterton, said in a prepared statement the property provided an attractive addition to the firm’s portfolio because of the opportunity to acquire a high-quality and well-amenitized property below replacement cost combined with strong leasing momentum.

Built in 2017 by Wood Partners, Alta Roosevelt is located within steps of the Loop, Chicago’s central business district, and the rapidly growing West Loop, both major employment drivers in the city. The property is located less than a half-mile from the LaSalle and Harrison stations of the Chicago Transit Authority. Residents also have convenient access to the Dan-Ryan Expressway (I-90) and the Eisenhower Expressway (I-290).

Heigel stated the location is highly accessible and near several developments and redevelopments, including BMO Tower and the Old Post Office, which drive demand. She said the firm expects the location to continue to benefit from solid household formation and employment growth.

The building has a mix of one-, two- and three-bedroom floorplans. It offers 50,000 square feet of common area space and amenities including an outdoor pool and spa, an outdoor lounge with grilling stations and TVs, a dog park, a bike room, a package room, a game room with bowling lanes, a fitness center, a yoga studio and an entertainment kitchen. The property also has a four-story parking garage.

At the time it was built, Alta Roosevelt was the largest multifamily property completed in the Midwest, according to Yardi Matrix data.

Waterton is a real estate and property management company that focuses on U.S. multifamily, senior living and hospitality properties. The privately held company is headquartered in Chicago with regional teams throughout the U.S. As of June 30, the portfolio includes approximately $9.3 billion in real estate assets.

In August, Waterton made its 18th purchase in Texas with the acquisition of Mission Gate, a 24-acre, 434-unit multifamily property in Plano, Texas, from Magellan Development Group. The price was not disclosed. The purchase was Waterton’s third in Plano, a city north of Dallas.

Waterton bought a 736-unit community in Ontario, Calif., in May and sold a four-story asset in Stamford, Conn., in February.