According to Yardi Matrix, the assets are clustered in the downtown area, with the largest reaching 32 stories.

The Orlando metro currently leads the nation in rent growth and is expected to further grow its average rent by 4.5 percent for 2018, per Yardi Matrix data. As the main economic engine of Central Florida, the county seat of Orange County also leads the state in job creation, further creating a strong environment for rental growth and the need of multifamily stock.

Yardi Matrix put together a list of the tallest residential properties in Orlando. However, the list might as well have focused solely on Downtown, as 9/10 assets are situated in the city’s central submarket. According to available Yardi Matrix information, the average occupancy rate of these buildings reached 83.9 percent as of May 2018. 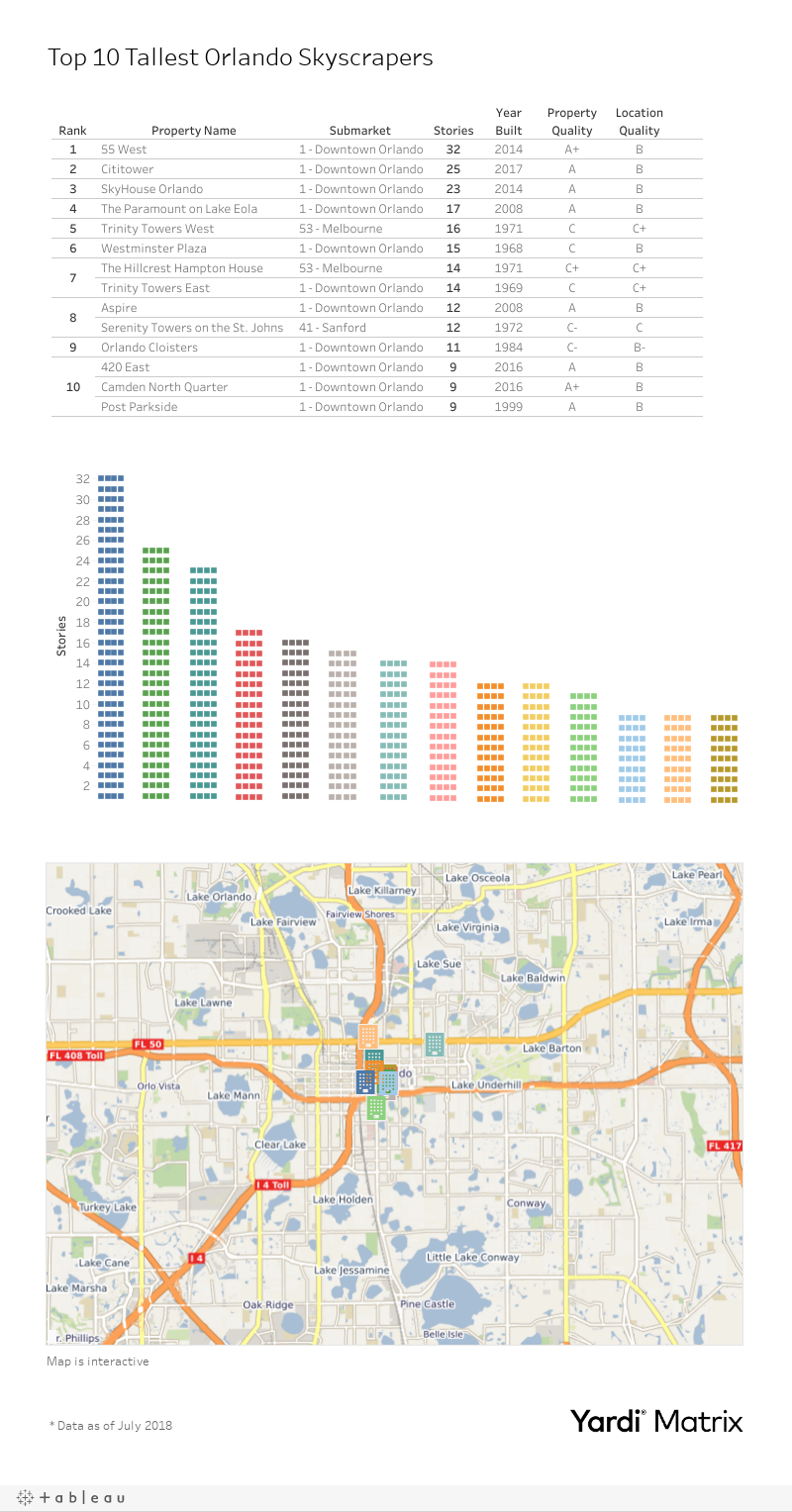 Pizzuti completed the nine-story community in 2016 and then sold it for a whopping $80.8 million this February. After purchasing the 333-unit asset, Camden Property Trust rebranded The Sevens to Camden North Quarter. The acquisition made the REIT the largest landlord in downtown Orlando. Located at 777 N. Orange Ave., the property was 86.2 percent occupied as of May 2018.

The 1984-built, age-restricted affordable community’s unit mix consists of studios and one-bedroom units in an 11-story structure. The property located at 757 S. Orange Ave. offers Section 8 efficiency to residents aged 62 and older. The owner, Cathedral Cloister, refinanced the asset in August 2017 with a HUF 223(f) loan, intended for property improvements. The $6.5 million financing is scheduled to mature in September 2052.

The only green building on our list—the property previously known as Dynetech Centre—opened in 2008 and encompasses 164 units. As of May, the 12-story building located at 111 E. Washington St. was 92.1 percent occupied. Aspire is currently subject to a $46.9 million permanent financing originated by Ladder Capital in 2013. Owner Lincoln Property Co. also provides property management services at the building.

The 15-story affordable community is the third age-restricted property on our list, totaling 198 units. Located at 350 E. Jackson St., the 15-story building was completed in 1968 and features residences for moderate-income seniors, aged 62 and older. Amenities at the Westminster Communities of Florida-owned and managed asset include a fitness center, library, laundry facilities and clubhouse.

Located at 650 E. Strawbridge Ave. in Melbourne, Fla., the 192-unit affordable community houses residents aged 62 and older. The 16-story tower opened in 1971 and underwent an extensive $9 million renovation program that wrapped up in 2016. The owner, Preservation of Affordable Housing, acquired the property for $3.8 million from the Holy Trinity Episcopal Church in 2013.

4. The Paramount on Lake Eola

The 280-unit high-rise includes 16 stories of housing atop 45,000 square feet of retail and 10,000 square feet of office space at 415 E. Pine St. Completed in 2008, the property features a fourth-floor swimming pool, clubhouse, fitness center, spa and a total of 523 parking spaces. Northland Investment Corp. acquired The Paramount on Lake Eola for $57.8 million in May 2017 from Obligo Real Estate.

The newest asset on our list came online in 2017 with the help of a $63.9 million construction loan provided by Bank of the Ozarks in 2015. The 25-story tower comprises 233 units, posting a 30.5 percent vacancy rate as of May 2018. Owned by Summa Development Group, Cititower features a collection of studios and one- to three-bedroom residences, and includes 22,300 square feet of retail space at 101 Lake Ave.

The tallest apartment building in Orlando, according to Yardi Matrix, comprises 461 units and was completed in phases, in 2009 and 2014. The 32-story tower is located at 55 W. Church St. TA Realty acquired 55 West in 2011 for $75 million and built out the asset’s top four floors. The property changed hands once again in 2017 for $105 million, when LivCor purchased it as part of a 2,351-unit, multi-state portfolio acquisition.