Miami—A 1.1-acre development site in Miami has traded hands for $11.3 million. The site at 6800 Indian Creek Drive had previously gained approval for an 80-unit, 14-story residential tower with 18 proposed boat slips. In addition, the land is one of the only remaining waterfront residential development opportunities in Miami Beach. The seller was Windsor Capital. A private real estate investment group acquired the site. ARA’s Boca Raton office brokered the sale. 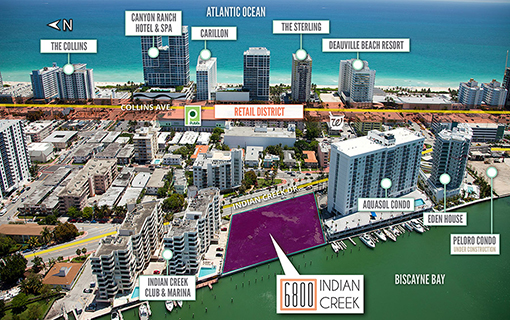 “There are very limited opportunities for development on Miami Beach,” says Troy Ballard, lead ARA advisor on the transaction. “Canyon Ranch, in particular, adds tremendous cache to the area. In addition, the site boasts the ability to reconstruct dock space for 18 boat slips. New marina approvals are extremely challenging. This makes boat slips a rare commodity.”

According to the South Florida Business Journal, Windsor Capital picked up the site back in late 2011 for $3.8 million from Bank of America. BofA had acquired the development site from Atlantic Sunset Bay—which had obtained approval for the 80-unit condo—after the firm foreclosed on a $6.5 million mortgage.

The loans will refinance prior debt on the assets, which Berkadia originated in conjunction with GE Capital Healthcare Financial Services in 2012. The new loans are fully amortizing, and feature a 4.03 percent interest rate. The 15 communities, operated by Meridian Senior Living, consist of 1,136 beds and are approximately 90 percent occupied.

New York—Clal US, a wholly owned subsidiary of Clal Insurance, a publicly traded insurance company, pension fund manager and one of Israel’s largest financial institutions with over $40 billion in assets under management, announced the acquisition of its first multifamily asset in the United States. Clal purchased Infinity Apartments, located on Old River Road in Edgewater, N.J., for $48 million.

Clal US opened its Manhattan office in May and has allocated several hundred million dollars in funding towards real estate acquisitions in the United States. The company purchased Infinity through a joint venture with Waterton Associates LLC, a multifamily investor and operator, and has plans to acquire additional residential assets over the next few years, alongside its growing commercial portfolio.

“I am thrilled to be driving Clal Insurance’s value with the acquisition of this superb investment,” says Tamir Kazaz, the CEO of Clal US. “Over the next several years, Clal plans to grow its multifamily portfolio with a targeted focus on premier properties in the New York City Tri State area.”

Infinity Apartments, located at 340-342 Old River Road in Edgewater, is a new construction Class-A mid-rise community with 100 one- and two-bedroom apartments. The six-story multifamily building contains a two-story parking garage and 5,600-square-feet of commercial space. Amenities include a state-of-the-art fitness center, steam room and sauna, business center and resident meeting rooms. Apartments include custom cabinetry, granite countertops and private balconies with open views into Manhattan skyline. Waterton Residential, Waterton Associates LLC’s property management division, will oversee the initial lease up, which is being led by The Marketing Directors, beginning Spring 2014.

Clal made its debut to the U.S. real estate market with the purchase of 49 percent of One South Wacker, a 40-story commercial skyscraper in Chicago with 1.2 million square feet of office space.