An ARA-brokered boutique apartment sale sets a price per unit record in Denver's Uptown neighborhood; Greystone provides $36.7 million refinancing for a skilled nursing facility in Hollis, N.Y.; and Radco acquires a property for $6 million and plans a $3 million upgrade. 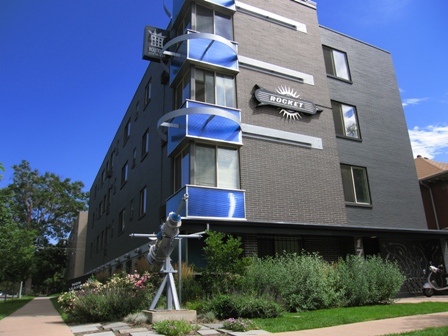 Denver—A boutique 24-unit apartment community known as Rocket has traded hands in the Uptown neighborhood of Denver for $3 million. The deal achieved record price per square foot in Uptown (for buildings under 200 units) at $291.50. ARA brokered the sale on behalf of the seller, Boutique Apartments™. Illinois-based Saratoga Realty Services was the buyer.

“At 24 units Rocket achieved a record price per square foot for an apartment building under 200 units in this neighborhood,” says ARA’s Justin Hunt. “We have seen several sales approach the $300 per square foot mark and expect to surpass that benchmark for existing product in 2014.”

Rocket is located at East 18th Avenue and Gilpin Street. The asset was built in 1963 and was remodeled in 2006.

Hollis, N.Y.—Greystone has provided a $36.7 million HUD loan to refinance a 314-bed skilled nursing facility in the Queens neighborhood of Hollis, N.Y. Fed Levine, a senior mortgage banker at the firm, originated the transaction.

Greystone initially funded a bridge loan for the acquisition of Holliswood Center for Rehabilitation and Healthcare by Centers for Specialty Care Group in May 2013, and closed the permanent FHA financing in less than one year. The HUD loan carries both a 30-year term and amortization at a low rate.

“We are thrilled to have successfully closed on our permanent HUD financing for Holliswood after Greystone initially provided our bridge loan less than a year ago,” says Daryl Hagler, managing member of Hollis Realty LLC. “With our growing portfolio, it’s important to know that we have a partner like Greystone to depend on. Many lenders discuss bridge to HUD loans but only a few can execute as well as Greystone. We look forward to closing more transactions together.”

Tulsa– The RADCO Companies, one of the nation’s leading real estate opportunistic and value-added specialists, is continuing its strategy of acquiring underperforming multifamily communities with its purchase of Southern Slope in Tulsa. RADCO acquired the 142-unit apartment community for approximately $6 million in an off-market transaction from the lender. Raymond Lord and Benjamin Davis with NAI Commercial Properties brokered the transaction. The announcement was made by the company’s founder and CEO, Norman J. Radow.

Following the acquisition of Southern Slope, which is the company’s second property in Tulsa, RADCO’s current portfolio includes more than 6,000 multifamily units. RADCO financed the purchase through a mixture of bridge debt and private equity. To date, RADCO has raised $130 million of private equity to fund its acquisitions.

Built in 1983, Southern Slope is situated on 10.1 acres in the Jenks submarket of Tulsa. The 10-building property contains 142 units that are equally divided between one-bedroom and two-bedroom layouts.

RADCO plans to implement an interior unit upgrade program, while also completing a major overhaul of the exterior and the property’s amenities. The company will rebrand the property as Ashford Ridge to coincide with the company’s brand identity and its new ownership.

“I believe in the Tulsa market, which I see as underserved. RADCO appreciates the importance of the Jenks school district, which ranks as the best in the state,” said Radow. “Nothing trumps the compelling story behind what we are renaming Ashford Ridge. It is the closest apartment community to the burgeoning St. Francis Medical Center, the largest medical complex in Oklahoma. With its superior location, unparalleled views and the $20,000 per unit of capital improvements we intend to invest, this property will undoubtedly be a market leader.”

The property is a short block away from the center of the growing St. Francis Medical Center, which currently employs 7,500 people and includes one of the highest ranked cardiac hospitals in the country.

This marks the company’s second acquisition in Tulsa and its fourth nationwide this year. RADCO previously acquired the 284-unit Ashford Overlook at West 61st Street and South 33rd West Avenue in January. The company plans to pursue additional value-added opportunities in the Tulsa and Oklahoma City markets.