‘The Essential Kitchen’ with Kevin Henry: THE FUTURE AS IT SHOULD HAVE BEEN

More than 70 years ago, the “Futurist” predicted that our world would be awash in jet-packs, flying-cars, moving sidewalks, personal robot helpers, mile-high cities, and let us not forget the ambiguous vacation on the Moon, or better yet on Mars. Much like a feather on a string in front of a playful kitten, the kitchen […]

More than 70 years ago, the “Futurist” predicted that our world would be awash in jet-packs, flying-cars, moving sidewalks, personal robot helpers, mile-high cities, and let us not forget the ambiguous vacation on the Moon, or better yet on Mars.

Much like a feather on a string in front of a playful kitten, the kitchen of the future with all its time and labor saving gadgets and gizmo’s, has been dangled in front of the American consumer since the 1939 New York Worlds Fair, but for me the future became a reality one very hot summer day in 1960, while I stood in line at Disneyland to see the house that would change my life forever, the house of the future…the Monsanto House. 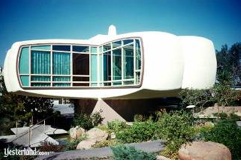 My first impression of the future, as an eight-year-old boy, was that it would be cool. Ice-cold air-conditioned air blew on my skin as I walked in from a hot and sticky Anaheim heat wave. There was the future…laid out before me like a buffet. The embodiment of every science fiction movie, TV show, book, magazine and comic book I had ever seen, all before me in glorious molded plastic, and as expected, everything was white or chrome with accents of color, it would be easy to see my life in this home of tomorrow.

And the kitchen of this brave new world was laid out as if a medical laboratory. A shiny, gleaming, pristine environment where actual food and food preparation would be banned and we would pop “food-pills” and consume “radar-ranged” freeze-dried dinners, and our personal robot helper would clean up the dishes using no water in the sonic dishwasher and we would all talk to our friends and family on a Viz-A-Phone after dinner.

Thankfully many of these visions are still the stuff of science fiction. But as we wade knee-deep into the 21st century, we find that a few of Monsanto’s visions have survived and evolved. The ubiquitous microwave oven has evolved from the radar-range in to an everyday kitchen cornerstone. The magnetic induction cook-top with its heat-free cooking is right out of the Jetsons and the integrated dishwasher, though not sonic I am sorry to say, is a standard feature in every American home.

So, where is the future I was promised? I had invested all that time in books and movies and I knew every nook and cranny and back road of the future, and with great disappointment I woke one morning to the world as it was and lived out my days feeling a little bit cheated. But then something happened, the future caught up with me. I realized one day, not so long ago, that I am living in the future of my youth, but only without the official uniform of the future, the one-piece unitard.

I have my Bluetooth firmly lodged into my ear, I drive an electric car and I can watch TV as well as communicate instantaneously, around the world via email, IM or Twitter…all from my cell phone. I don’t have a personal robot assistant, but I do have to lift my legs every now and then with the RUMBA comes scooting along the floor. I knew for sure I was living in the future, as I sat on my sofa, watching live images streaming in from Mars, while eating microwaved popcorn. Now, if I only had a jet-pack.

(Kevin Henry is the executive vice president of Bazzèo LLC. He can be reached at [email protected] or read more of his observations at www.theessentialkitchen.blogspot.com)