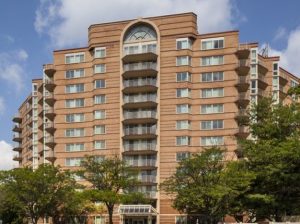 The Dolben Co. has secured $28.4 million in permanent financing for Lake Arbor Towers, a 209-unit multifamily community in Mitchellville, Md., in the Washington, D.C., area.

JLL arranged the 10-year fixed-rate loan through Eastern Bank. The property was previously subject to a $24 million CMBS loan originated by KeyBank in 2016 and set to mature in June 2023, according to Yardi Matrix data.

Built in 1990, the property includes one- and two-bedroom floorplans, ranging from 675 to 1,100 square feet. Apartments feature washers and dryers, renovated kitchens and baths and high-speed internet access. Community amenities encompass a sundeck, fitness center, swimming pool and social room, as well as a stand-alone rental office and 500 parking spaces.

Located at 11411 Lake Arbor Way, the 12-story community is less than 3 miles from the Largo Town Center Metro which offers access to Washington, D.C., via two lines. The property is also roughly 3 miles from Interstate 495 and some 23 miles from Fort Meade, one of the state’s largest employment clusters. The University of Maryland Capital Region Medical Center and the Kaiser Permanente Largo Medical Center are both within 4 miles of the community.