The British Are Coming: Will Brit-Themed Condo Entice Buyers?

Rilea Group is developing the Bond on Brickell, a 328-unit luxury tower condominium in in Downtown Miami’s Brickell Financial District. 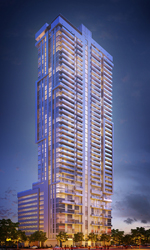 Miami—Rilea Group is developing the Bond on Brickell, a 328-unit luxury tower condominium in in Downtown Miami’s Brickell Financial District.

“It’s a fantastic new residential building coming to the Brickell market,” Diego Ojeda, Rilea Group’s president, told MHN. “It is the first British-themed building, which is very cool in the sense that we did a partnership with a famous photographer named Terry O’Neill, and we’re going to have a series of his collection throughout the building, which gives it a great edge.”

Amenities include a pool deck with a T-shaped pool, a bamboo wood deck, three summer kitchens with individual outside living rooms complete with barbeques and flat screen TVs, a fire pit, spa, library and a state-of-the-art fitness center.

“We also have a room we call the Parliament Room, which is more of a lounge where residents can hang out with friends,” Ojeda said. “There’s a pool table, a card table, and it’s a rec room for adults. For kids, we have a learning center on the same floor with computers and other things designed for them.”

The Bond will also feature an original vintage British Telecom phone booth, which the building’s developers had restored to museum-quality condition and flown in from London.
Rilea Group has been building in Miami for 30 years and this is its fourth development in Brickell, joining One Broadway, the 1450 Brickell office tower and the Sabadell Financial Center at 1111 Brickell Ave.

“We know this area pretty well and we saw the demand for more housing,” Ojeda said. “We bought this land in 2005, sat on it during the recession and once we saw the market come back, we decided to go.”