ACRES Capital Corp. provided the financing to The Goldstar Group to develop the 350-unit property. 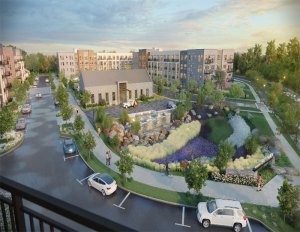 Residences at East Church. Rendering courtesy of The Goldstar Group

The Goldstar Group has secured an $84 million loan from ACRES Capital Corp. for the development and stabilization of Residences at East Church, a $112 million, 350-unit multifamily community in Frederick, Md.

The loan was arranged by Jamie Butler of Walker & Dunlop. Drew Miller of ACRES’ New York office originated the loan. Further details on the financing were not disclosed.

With final approvals secured from city of Frederick officials, Goldstar started construction at the 605 E. Church St. site in October. An official groundbreaking ceremony is scheduled for Dec. 9, according to Michael Brodsky, CEO of the Bethesda, Md.-based private commercial real estate investment and services firm. The project is scheduled for completion in November 2024.

Brodsky said it was the company’s first deal with ACRES, a nationwide middle-market lender. He told Multi-Housing News the firm faced issues securing a construction loan in the current capital market climate.

“It was definitely a challenge in a rising interest rate environment,” Brodsky said. “We were down the path with HUD on a 221(d)(4) (financing) but a variety of factors, including current interest rate levels, caused us to pivot.”

Goldstar acquired the 14.81-acre vacant lot from Frederick Health Hospital in 2020 for $7 million, Brodsky said. Plans call for the developer to dedicate nearly 3 acres of land for a public park.

The project will comprise five four-story buildings with a total of 350 units and 525 parking spaces. Community amenities will include a clubhouse, swimming pool and fitness center. The property will have top-quality exterior, interior and amenity finishes that will put it at the top of the competitive market for multifamily in the region. Residents at East Church will be a 15-minute walk from downtown Frederick, which features eclectic coffee shops, high-end dining and craft breweries. The property is near both Baltimore, Md., and Washington, D.C. Frederick County has become known as a leader in the bioscience and life science industries and is home to numerous prominent employers including the Fort Detrick military biotechnical research facility.

“Frederick is a growing market drawing from the recent increase in the biotech/lab growth and the proximity to both Baltimore and Washington,” Brodsky told MHN. “Frederick is a very livable city and recent population growth supports the multifamily demand.”