The sector's record-breaking performance continued into the third quarter of the year, according to Yardi Matrix. 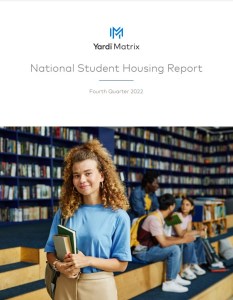 Demand has kept supporting strong student housing fundamentals in the third quarter of the year, according to the latest Yardi Matrix report. Preleasing at Yardi 200 universities concluded with a record percentage of bedrooms leased in September. Rent growth remained robust, while transaction activity remained elevated.

The fall 2022 preleasing period closed with once again with a record-breaking performance. As of September, 96.6 percent of beds at Yardi 200 universities were preleased. With selective universities filling the beds at a faster pace, a positive performance marked the majority of Yardi 200 institutions.

Washington State University led the list of universities with most year-over-year growth in percentage preleased—registering an 18.9 percent increase—and followed by University of Houston (16.4 percent). Not many schools struggled with leasing, but The University of South Alabama had the lowest percentage of bedrooms preleased across Yardi 200, with an 80.6 percent rate in September.

First signs of a slowdown

Annual rent growth across Yardi 200 universities reached 4.1 percent at the end of September, down 1.0 percent from its peak in 2022, while the average rent per bedroom hit $789—unchanged from August. Despite rent growth starting to cool off, some institutions still registered notable gains on a year-over-year basis, led by Northern Arizona University (17.7 percent) and the University of California-Santa Barbara (17.3 percent). Merely four Yardi 200 institutions had negative annual rent growth.

The sector’s new-supply pipeline also recorded a few-thousand-bed decrease, compared to the previous quarter. As of September, some 130,000 bedrooms were in different stages of development at Yardi 200 universities, with nearly 62,000 beds under construction. The University of Texas at Austin had the largest under-construction stock that month, comprising 5,315 beds—the equivalent of 10.5 percent of enrollment.

Head over to Yardi Matrix to read the full report.