Higher interest rates and lower leverage may make loans and deals more difficult, but transactions continue to get done.

Strong student housing occupancy, rent growth and pre-leasing activity continued to generate investment interest in student housing leading up to the 2022-2023 academic year. But like virtually all real estate categories, sales have slowed amid the Federal Reserve’s aggressive rate-raising actions to tame inflation.

Student housing investment sales reached $18.2 billion through three quarters this year, according to MSCI Real Assets, which tracks deals of $2.5 million or more. Blackstone’s acquisition of American Campus Communities accounted for $12.8 billion of that total, however, and as a result, the balance of $5.4 billion was $700 million shy of 2021’s total for the same period.

The higher interest rates have made it tougher for investors to put deals together that make financial sense unless sellers significantly reduce prices. By and large, sellers haven’t. Through three quarters, the average student housing capitalization rate was 5 percent, which is 10 basis points lower than where it was at the end of 2021, according to MSCI Real Assets. 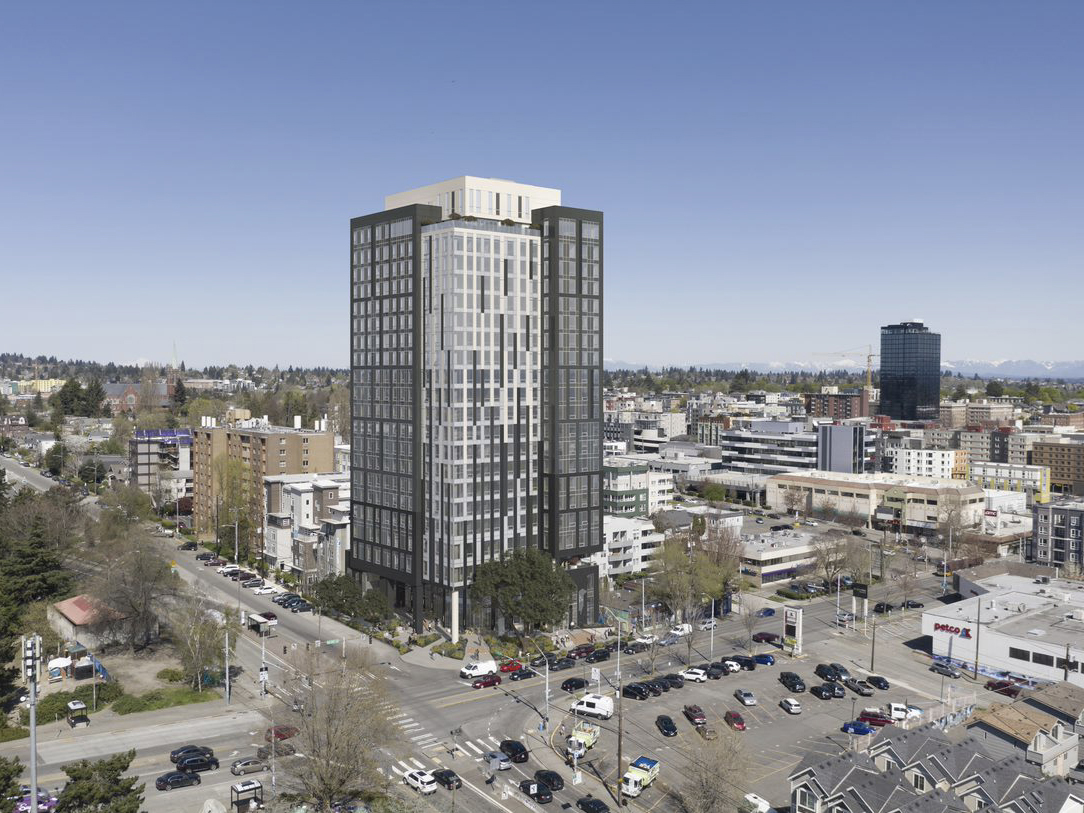 Champion Real Estate Co. plans to break ground in the second quarter next year on Victory at the U, a 110-unit, 516-bed student housing project at the University of Washington in Seattle. The firm began working on entitlements for the community in late 2019 and completed the acquisition of the land last summer. Image courtesy of Champion Real Estate Co.

“We’re seeing some of the best operational success that I’ve ever seen, so there is still a lot of capital allocated to student housing. But more of it is moving to the sidelines,” said Travis Prince, an executive managing director for Cushman & Wakefield in Tampa, Fla., who leads the firm’s national student housing capital markets team. “Once we see a little stability return to the market, I think we’ll start to see trades again and more normalized activity.”

As of June, more than 87.2 percent of student housing properties represented in the Yardi 200, which covers the top 200 investment-grade universities in the U.S., were pre-leased for 2022-2023, according to the Yardi Matrix’s third quarter National Student Housing Report. That wasn’t only a year-over-year improvement of 10.1 percent, but it was also 7 percent better than pre-leasing performance prior to the pandemic. Additionally, observers expect a strong renewal and pre-leasing season for the 2023-2024 school year. Enrollment trends are expected to remain favorable for the next eight years, too, according to the National Center for Education Statistics.

“We expect many of our properties to exceed that range in light of current supply and demand fundamentals across many of our markets,” Lowell stated. “We’re as bullish on student housing now as we have ever been.”

Unlike last year, Fannie Mae and Freddie Mac have been more active in the student housing space and are thereby capturing more market share as banks and debt funds rein in lending, said Will Baker, a senior managing director with Walker & Dunlop in Birmingham, Alabama, who is primarily responsible for new student housing and multifamily loan origination. 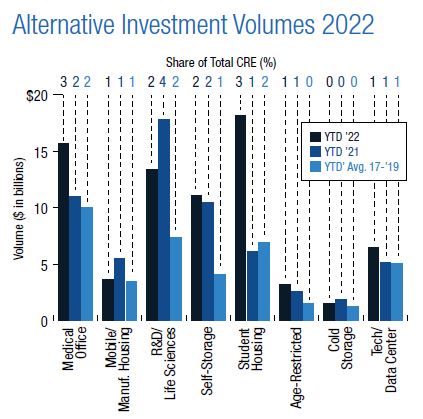 The agencies typically require debt service coverage ratios of around 130 for student housing assets, which is 5 basis points higher than the multifamily loan target, he added. Thus, as interest rates have risen amid the low cap rate environment, borrowers have seen the amount of debt they can secure relative to value drop from 65 percent to 60 percent, or even 55 percent, Baker said.

“With the 10-Year Treasury yield at 4 percent, it doesn’t feel that great locking in a 6 percent interest rate for 10 years,” Baker said. “The good news is that, as a lender, we’re much more comfortable offering full-term interest-only payments when borrowers bring that much equity in front of the debt. That’s how some borrowers are stomaching this lower leverage environment– a lower payment helps with their cash-on-cash returns.”

What’s more, lower-leveraged borrowers that are achieving robust rent growth are still able to fetch decent returns, even in situations where they might be in a negative leverage situation in the first year of the loan, Lowell said.

“Over the next couple of years, we maintain conviction the sector will see strong rental growth across a variety of markets– even on some of the older projects,” he explained.

In October, Harrison Street and Trinitas, a development firm based in Lafayette, Ind., announced a $450 million plan to develop four student housing communities at the Universities of Georgia, Indiana, Central Florida and Wisconsin. Higher construction costs and a Secured Overnight Financing Rate (SOFR) that is 305 basis points higher than it was at the beginning of the year has made it tougher to make development pencil out, Lowell acknowledged, particularly in schools that are not leading public or top-tier universities. 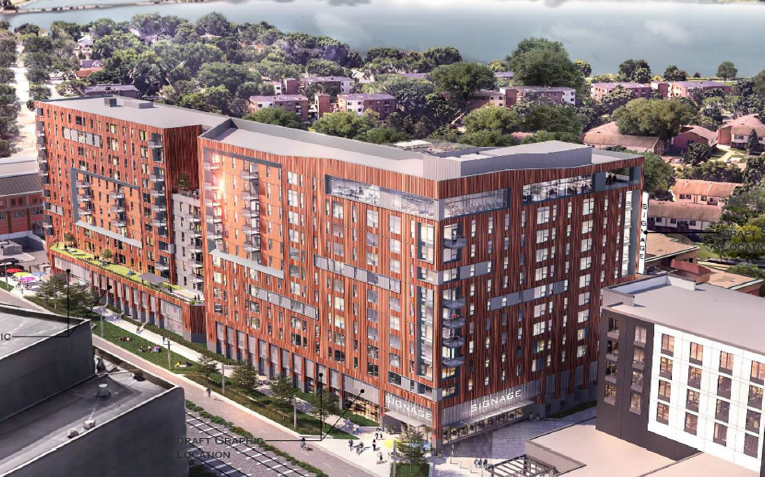 Harrison Street and Trinitas are developing Atmosphere Madison, a 12-story, 681-bed student housing project next to the University of Wisconsin. The project is scheduled to be delivered in 2024. Image courtesy of Harrison Street

Interest rate hedges are part of rising development costs, as well. Champion Real Estate Co., a development and value-add firm that has been rotating out of conventional multifamily and into student housing assets over the past few years, saw an initial $250,000 quote for an interest rate cap in a value-add deal rise to $1 million at closing earlier this year.

“That was tough to swallow,” said Parker Champion, COO and Partner of the Santa Monica, Calif.-based company. “Value-add deals tend to have thinner margins than ground-up development deals, so you really don’t have anywhere to hide.”

Still, Champion Real Estate continues to secure debt without pre-payment penalties so that it can execute its business plan and then sell or refinance. It typically prefers loans of around seven-years with about two years of interest-only payments, Champion explained. That gives the company the flexibility to hold onto properties in uncertain environments, like today’s, when a sale or refinance may not be possible.

In October, Champion Real Estate paid $43 million for the 75-unit Villages at Wake Forest, a stabilized student housing portfolio of single-family homes and duplexes. Primarily focused on improving operational efficiencies, the firm had to raise additional equity to lower its leverage to below 55 percent after the 10-Year yield jumped 100 basis points prior to closing.

“I hope I’m not still in the loan in three years after we’ve done our repositioning,” Champion said. “But to have four or five years of fixed financing, even at a little higher rate of around 6 percent, offers attractive downside protection if we have to ride out a storm that lasts longer than we think.”