Student Housing Continues to Grow, May Face Decline in 2018

Fundamentals could take a hit unless college enrollment returns to growth mode.

New York—The U.S. student housing market had its seventh consecutive year of annual rent growth in 2016, as inventory increased by 56.3 percent over the past 10 years. Kroll Bond Rating Agency released a report summarizing current trends in the student housing industry, and although it is expected that the sector will perform well in 2017, there are some declining numbers that student housing investors should keep an eye on in the coming years. 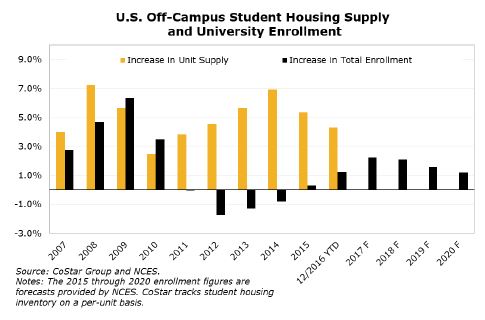 According to the National Center for Education Statistics, enrollment growth is expected to increase by 2.2 percent throughout this year, but is slated for decline in 2018 through 2020. Occupancy rates have only decreased in the last three years and were up 0.6 percent last year. As of December 2016, approximately 15,400 units were under construction nationwide, representing 4.3 percent of the existing inventory. If all these units are completed this year, the supply growth will be in line with 2016.

Steadily increasing rents since 2009 have resulted in significant asset appreciation. The drop in prices in 2013 and 2014 was due to lower university enrollment and the new supply delivered in those years. Values increased in 2015 before falling in 2016 to a level  consistent with that of 2012 and 2013. Student housing remains a niche industry class with fewer transactions than the major property types and the jump and drop in average price per unit observed in 2015 could be due to the limited number of trades.

“The sheer amount of supply that has come on-line, coupled with expectations of slowing enrollment growth after 2017, doesn’t bode well for the sector on an overall basis,” Anna Hertzman, managing director of KBRA, told Multi-Housing News. “However, performance varies considerably by market and institution and students; preference for purpose-built, highly amenitized housing appears to be overcoming headwinds in many markets.”

The target demographic for student housing properties, ages 18 to 24, is projected to decline 2.1 percent between 2015 and 2020 and is not expected to return to its 2015 level until 2035 to 2040, according to the U.S. Census Bureau. Recent market conditions for student housing transactions have been generally positive and are expected to remain so in the near term as a result of decreasing new supply trends, robust rent growth and decreasing capitalization rates. But if university enrollment does not return to positive growth as projected by the NCES and high school graduation rates begin to decline, student housing fundamentals could be negatively affected, which would have a negative impact on transaction activity.

The U.S. student housing experienced modest occupancy gains and an improvement in rental rates over the past year. KBRA expects the sector to experience positive trends in 2017; however, it isn’t clear how long that can be maintained at current levels due to the national university enrollment growth expecting to decline after this year. Property performance will be dependent on the specific strengths and weaknesses of individual assets within their local markets, as well as overall health of the institution a property services.