Strong First Half for the Multifamily Market

Despite consistent supply growth and the lack of affordability in major metros, rents increased by $29 in quarter two, up 2.1 percent for the quarter and 2.6 percent for the first half. 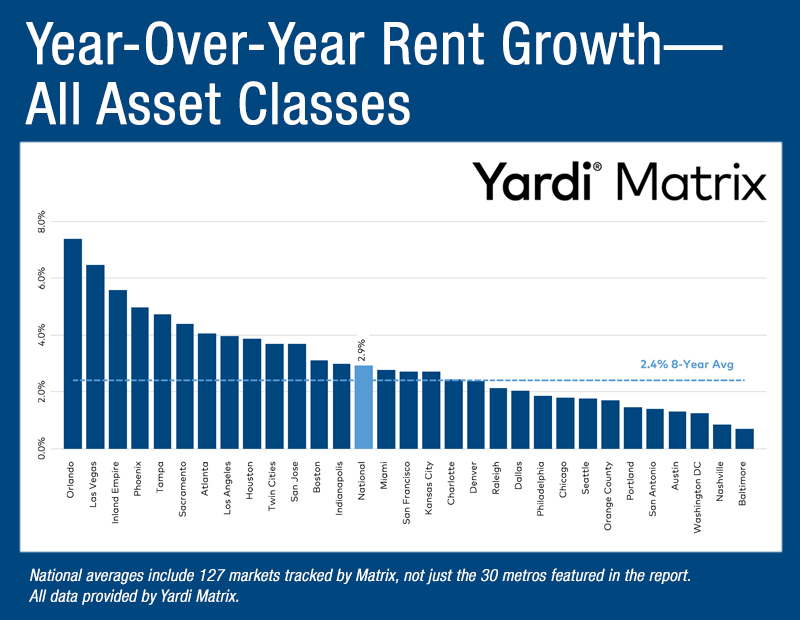 The first half of the year for the multifamily market was strong, with rents rising $12 in June, to the highest amount of $1,405 for the year. This marks a 20-basis-point increase over the past month. Despite consistent supply growth and the lack of affordability in several major markets, rents increased by $29 in quarter two, up 2.1 percent for the quarter and 2.6 percent for the first half.

The quarterly increase marks the highest since rents grew 2.3 percent in the second quarter of 2015. As for the first half, that record was beaten in 2016 with a rise of 2.9 percent. There were some doubts in the health of the market, which came from it being in the middle of a four-year period that had 1.2 million units coming online, resulting in a cool-off period for some high performing metros. The other concern was affordability, which has highly effected growth in larger metros such as New York and San Francisco.

According to Yardi Matrix’s monthly survey of 121 markets, rents increased 2.9 percent year-over-year. In terms of metro performance, Orlando once again led the pack, with a 7.4 percent rent increase. Rounding out the top four were Las Vegas with 6.5 percent, the Inland Empire rising 5.6 percent and Phoenix increasing 5 percent.