The first phase of a comprehensive redevelopment at the Stockland Wetherill Park shopping complex has reached completion according to the contractor, Brookfield Multiplex. 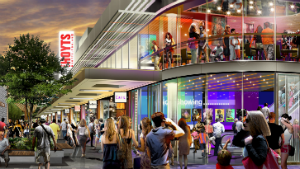 Sydney, Australia—The first phase of a comprehensive redevelopment at the Stockland Wetherill Park shopping complex has reached completion according to the contractor, Brookfield Multiplex. The $222 million project is segmented into three major stages with the final one set for completion by early- to mid-2016. The development is set to become one of Western Sydney’s biggest retail hubs.

Located at 561-583 Polding Street, the center will provide space for 200 specialty stores, 10 so-called mini-major stores, two discount department stores and two supermarkets. It will also feature multi-level parking for 2,700 cars as well as an entertainment and dining precinct with cinema, gym, a 800 seat indoor-outdoor food court with fresh food precinct and a children’s play area. The entire redevelopment will expand the existing space by close to 183,000 square feet.

The recently finished Stage One comprises an expanded outdoor restaurant, entertainment and leisure precinct spanning more than 107,500 square feet with over 10 restaurants and cafes, a fully refurbished Hoyts Cinema lobby and candy bar, state-of-the-art Fit ‘n’ Fast gym, JB Hi-Fi, 53 new specialty stores and an additional 750 car parking spaces. Since construction began in November 2013, the project has brought more than 2,250 new, local full and part time jobs to the area including 1,300 positions during construction and 950 full time and part time retail jobs on completion. The anticipated 350 full time retail jobs will foreseeably generate in excess of $10 million in additional wages within the local economy.

During the first stage of construction, the retail hub has been kept in operation according to David Ghannoum, NSW Regional Managing Director at Brookfield Multiplex. “The site is a busy, trading retail centre and our construction programming has ensured minimal disruption to its operation,” he said. The contractor also succeeded in finishing some of the components earlier than planned. “We have handed the car park over four months ahead of schedule and the retail precinct two months ahead of schedule and we are now seeing firsthand the importance it plays in the community,” Ghannoum added.

When completed, Stockland Wetherill Park is anticipating receiving the Five Star and As Built certifications in the Green Building Council of Australia’s Green Star rating system. The upgrades include a number of environmentally sustainable design (a.k.a. ESD) features such as high efficiency air conditioning systems, low usage water equipment and fixtures and solar cells to generate electricity.