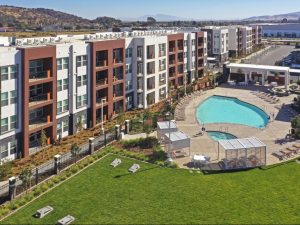 Sentinel Real Estate Corp. has acquired Nova at Green Valley Apartments, a 281-unit community in Fairfield, Calif. The Spanos Corp., which also developed the property, was the seller.

In 2020, the project was subject to a $61 million construction loan originated by Bank of the West, according to Yardi Matrix data.

Located at 4501 Business Center Drive, the community is part of the 132-acre Green Valley Corporate Park. Spanos managed to rezone the site for multifamily development, in addition to the initial commercial uses. The community is close to the interchange of interstates 80 and 680, offering access to employment and entertainment options throughout the Bay Area. The asset is situated less than 45 miles from both Sacramento, Calif., and San Francisco.

Roughly a year ago, family-owned builder of multifamily housing and master-planned communities Spanos sold off another Sacramento-area community it developed. Oakmont Properties paid $85.6 million for the Class A community in El Dorado Hills, Calif.

Sentinel’s Northern California portfolio comprises a total of five properties. President of Sentinel Michael Streicker mentioned in prepared remarks that the lack of development in the Fairfield submarket should keep long-term demand strong at the firm’s newly acquired property. He also added that over the last 10 years, only two communities have been delivered in the city.