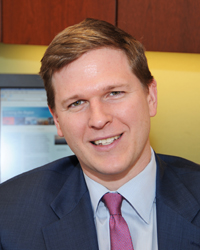 New York—Related Companies today announced that Philippe Visser will join Related and the Hudson Yards development team as senior vice president of development. In this role, Visser will be a part of the executive team on the historic nearly 28- acre project and be primarily responsible for leading the development of the 80 story, 2.5 million square foot North Tower as well as other Hudson Yards commercial projects.

Prior to the World Trade Center, Visser was responsible for the acquisition and development of New York City projects for Tishman Speyer, worked in acquisitions at Vornado Realty Trust and ran the day-to-day development of commercial office and mixed-use projects for Forest City Ratner. Visser graduated summa cum laude from the University of Pennsylvania, where he was a Phi Beta Kappa member and Truman Scholar.  e has an MBA from the Columbia Business School and a Master’s of Science in Regional and Urban Planning (with Distinction) from the London School of Economics, which he attended as a Thouron Fellow. Visser currently serves on the boards of the Lower Manhattan Cultural Council, Downtown-Lower Manhattan Association, and the Alliance for Downtown New York, and is an active member of the Urban Land Institute.