The community will see its first residents in mid-2024, shortly before completion. 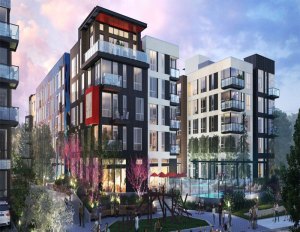 Quarterra Multifamily and QuadReal Property Group have broken ground on their third multifamily project together in the Seattle area. The joint venture completed the subsurface work and started vertical construction on The Piper Apartments, which is expected to see its first move-ins in mid-2024. The community is then expected to be fully complete three months after welcoming the first residents.

The joint venture tapped Encore Architects to design the project, Gensler as the interior designer and BCQ as the project’s structural engineer. The developers also tapped McCullough Hill Leary as the land use attorney, while Weisman Design Group will be the landscape architect. The Piper Apartments also secured an undisclosed amount of debt financing from JP Morgan Chase & Co.

The luxury community will have its 284 units spread throughout two five-story mid-rise buildings. The Piper will offer studio, one-, two- and three-bed units ranging from 475 to 1,400 square feet that will be built with full-size washer and dryers, USB outlets, and air conditioning in each unit. According to Quarterra, 10 percent of the units will be designated as affordable at 50 percent of the area median’s income.

The community’s amenities will include a club room, theater room, pool, spa, indoor kids’ playroom, outdoor kids’ play area, outdoor plaza, pet spa, coworking spaces and electric vehicle chargers. The developers are also planning to periodically house artists in residence in a dedicated space along the community’s art walk pathway that will have murals, sculptures and other artworks from 11 local artists.

The Piper’s location at 17305 NE 67th Court puts it directly next to Marymoor Park with its many trails, sports facilities, climbing wall, and 40-acre dog park. The community is also located a few blocks away from a future Southeast Redmond Light Rail Station and a short drive from the area’s major highways including Redmond Way, State Route 520 and East Lake Sammamish Parkway that connects to Washington’s major cities and tech employers.

Teaming up for the third time

For the joint venture, The Piper represents the third project between Quarterra and QuadReal in the region. The two companies recently opened a 548-unit high-rise community in Seattle’s First Hill neighborhood called Ovation. The joint venture also previously began the first move-ins for its 450-unit Spectra community that’s also located near Marymoor Park.

On its own, Quarterra is up to nine developments in the Seattle metro area with The Piper. The company has a handful of completed mid-rise buildings in its portfolio and is currently working on its Tavin community in Seattle’s Crown Hill neighborhood. Outside of the Seattle area, Quarterra started construction on a 265-unit community in Allston, Mass. last month, marking its second project in the state.