A rendering of The Lydian

Washington, D.C.—More luxury apartments are headed to D.C.’s Mount Vernon Triangle neighborhood thanks to a new development from Quadrangle Development Corp. and The Wilkes Co. The Lydian, a 324-unit apartment community, has just broken ground, adjacent to one of the development team’s other communities, Lyric 440K. The Lydian will also mark the Quadrangle-Wilkes team’s seventh building it its 2 million-square-foot, mixed-use Mount Vernon Place community.

“The Triangle is a vibrant, highly desirable in-town neighborhood with top walkability and transit scores and an active and interesting mix of 24/7 uses,” Christopher Gladstone, president of Quadrangle Development Corp., told MHN. “Mount Vernon Place seeks to reinforce this existing character of the neighborhood through a thoughtfully conceived master plan.”

The Lydian, located at 400 K Street, N.W., will include 13,410 square feet of first-floor shops and restaurants with 14-foot finished ceilings and floor-to-ceiling windows looking out to K Street.

As far as amenities go, residents will have access to 24-hour concierge, fitness center, pet washing and grooming stations, second-floor tranquility garden and a cyber cafe. Outdoor features include a rooftop pool and spa, rooftop grilling stations with seating areas and an herb garden, and a rooftop club room with panoramic views, a bar area fireplace, pool table, televisions and a large dining area for private events.

First occupancies are expected in March 2018 with a leasing office planned for opening in January 2018.

“The Lydian is designed to appeal to residents seeking every convenience to enjoy living in downtown Washington, D.C.,” said Christopher Gladstone, president of Quadrangle Development Corp. “Mount Vernon Triangle is one of the most vibrant and walkable neighborhoods in D.C., steps from the Verizon Center, several Metro stations, galleries, and more than 55 restaurants and shops within the immediate Triangle community.” 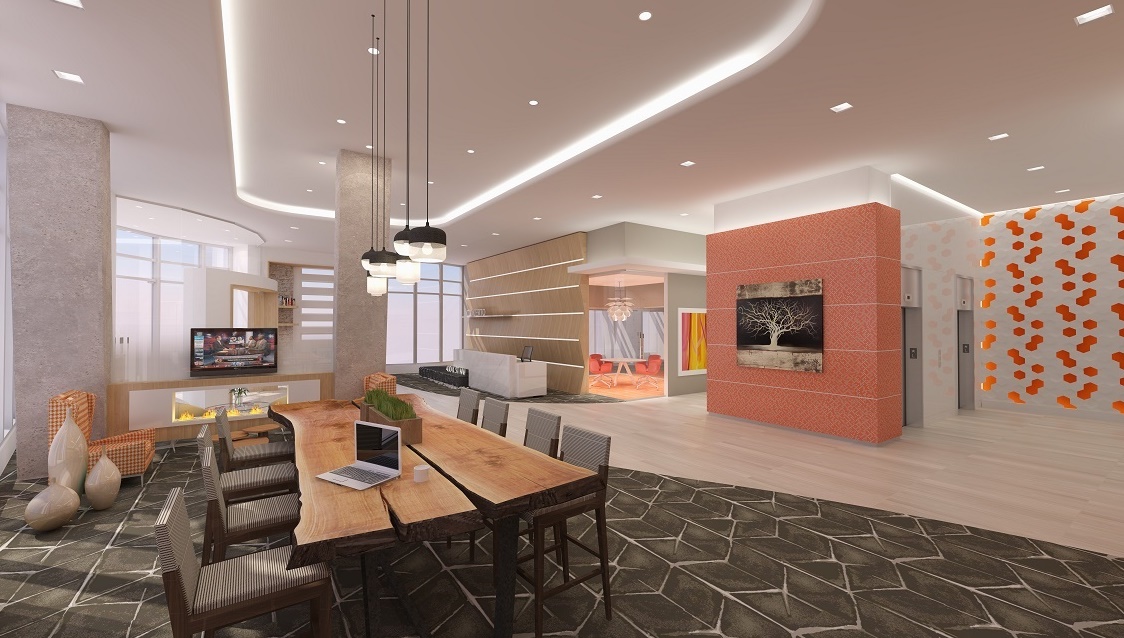 A rendering of The Lydian lobby

The Lydian is one of several residential developments from the Quadrangle-Wilkes team that references musical terminology, including The Madrigal Lofts, The Sonata and Lyric 440K. The Lydian Scale influenced the work of Miles Davis, John Coltrane and Ornette Coleman, according to Wilkes Co. Chairman Charles (Sandy) Wilkes.

The Sonata and The Madrigal Lofts are both condominium communities built in 2007, while the most recent delivery was Lyric 440K, a sister apartment building to The Lydian in terms of architecture and features that was completed in 2013.

The overall Mount Vernon Place community is being developed by the Quadrangle-Wilkes partnership and designed by architecture firm Hartman-Cox Architects with landscape architect Sasaki Associates. When complete, it will comprise nine buildings, including 1 million square feet of office and retail space and another 1 million square feet of residential space totaling 1,000 units along Massachusetts Avenue, Third and Fourth Streets, N.W. In addition to the residential properties, the other buildings include the AIPAC office building at 251 H St., N.W., which was completed in 2007, and 901 4th St., N.W., which is a new 100,00-square-foot headquarters building now under construction for the DC Bar.

“On the drawing boards are two additional office buildings and two additional apartment buildings. The completion date for these final buildings will depend on market conditions,” Gladstone told MHN. “The buildings in Mount Vernon Place are separate and distinct both in terms of use and architecture– he goal is to create a successful live/work/play neighborhood that is interesting and distinct in terms of uses, design and overall urban experience…Mount Vernon Place is stitched into the Triangle’s existing fabric with the goal of reinforcing the neighborhood and adding to its current character.”

He added, “there is a strong emphasis on the quality of the street-level experience as a unifying factor,” which includes specially curated retail uses, public art and extra-wide public spaces with outdoor seating and landscaping.

Renderings courtesy of the Quadrangle-Wilkes team