Despite a surge in multifamily construction, apartment vacancy in Pittsburgh is estimated to remain just under 4 percent by the end of the year.

Despite a surge in multifamily construction, apartment vacancy in Pittsburgh is estimated to remain just under 4 percent by the end of the year. 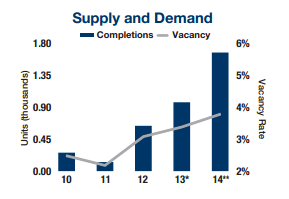 According to research data from Marcus & Millichap, developers are expected to ramp up deliveries in 2014, with the completion of 1,650 units, a 1.2 percent increase from last year and the largest inventory expansion in more than a decade. In 2013, 950 apartment units were completed, the report shows.

Many of the new projects are located either north or south of the city’s commercial business district, in areas where construction costs are relatively lower. 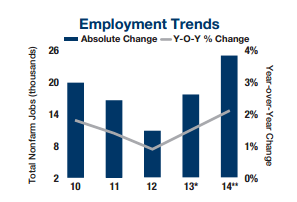 In fact, Pittsburgh’s diversified economy will lead to the creation of 24,600 jobs this year, representing an increase of 2.1 percent in total employment. Approximately 17,300 positions were added in 2013.

Some of the city’s submarkets, however, are expected to experience an oversupply of new apartments and single-family homes, which will slow down last year’s rent growth. 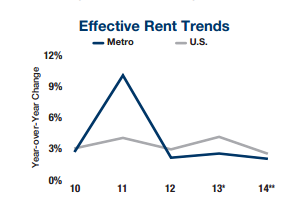 Marcus & Millichap’s forecast shows that effective rents this year will advance by 2.1 percent, reaching $1,041 per month. Last year’s increase was of 2.6 percent, the report shows.

As the year progresses, Pittsburgh’s multifamily market will see a strong demand from investors. Transaction velocity, however, may remain sluggish, due to the region’s limited supply of for-sale assets.

Buyers will likely target a broader range of properties, including Class B/C assets listed under $10 million, preferably in the Oakland and Shadyside submarkets, the city’s most sought-after locations. 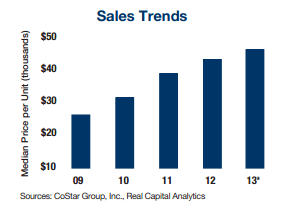 Some owners on the other hand may remain reluctant to the idea of selling their long-term assets in the context of an ever-improving economy. Meanwhile, the increasing buyer competition coupled with the risk of rising interest rates will determine other investors, who acquired properties during the downturn, to bring them to the market this year.

Also in 2014, Pittsburgh entered the National Apartment Index in the 32nd position.

Blackstone Buys Resource REIT for $3.7B