Optima Moves Ahead With $1B Arizona Development

Optima McDowell Mountain Village in North Scottsdale will have some 1,300 units spread among rental apartments and for-sale condominiums. 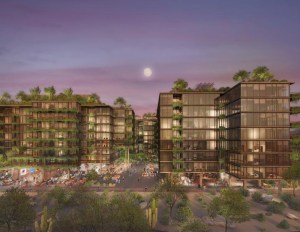 Chicago-based Optima will break ground on an Arizona residential community, the $1 billion Optima McDowell Mountain Village, in North Scottsdale, Ariz., later this year. It has received all city approvals for the 22-acre sustainable mixed-use development.

The project will consist of six eight-story buildings with approximately 1,300 residential units in addition to 36,000 square feet of commercial space. Four of the buildings will be rental apartments and two will offer for-sale condominiums.

Cushman & Wakefield advised the development firm in the acquisition of the site on the southeast corner of Scottsdale Road and the Loop 101 Freeway. Optima acquired the land, where three car dealerships had initially been proposed, from John Lund for some $44.8 million.

Arones said in prepared remarks the project will provide needed upscale housing to the employers in the growing Scottsdale area and surrounding communities. The strategic location along the freeway makes the property convenient for residents to access from any destination, he said.

Construction on Optima McDowell Mountain Village, described as Optima’s most sustainable project to date, is slated to begin either this spring or summer. David Hovey Jr., Optima’s president, COO and principal architect, said in a prepared statement the company is excited about the location as it is nearby the McDowell Mountains, Loop 101 freeway and major employment opportunities.

The project will architecturally feature more than 75 percent open space with six buildings surrounding a central sheltered courtyard comprised of xeriscape, drip irrigation and artificial turf. The asset will have the largest private rainwater harvesting system in the United States as well as the next evolution of Optima’s vertical landscaping system and active roof decks, Hovey said in prepared remarks. Hovey and his father, David C. Hovey, Optima co-founder and co-CEO, designed the Optima McDowell Mountain Village.

The community will be the first in Arizona to be built under both the new International Energy Conservation Code and International Green Construction Code. Other sustainable features will include high-performance mechanical systems, solar panels, underground parking to mitigate the heat-island effect and Optima’s signature vertical landscape system.

The unit mix will consist of studio, one-, two- and three-bedroom homes ranging from 775 square feet to 2,025 square feet. Each building will have its own resort-style amenities including a rooftop deck with a 50-meter Olympic-length swimming pool; sauna, spa and cold plunge; running track that will follow the perimeter of the roof; outdoor fireplaces; lounge seating; outdoor kitchens with barbecues and dining spaces with sheltering arbors.

Ground-floor level of each building will have lobbies; a fitness center and yoga studio overlooking the courtyard; a sauna and steam room; a residents’ club with game room and theater; an indoor basketball and pickleball court and outdoor pickleball arena; golf simulator; outdoor putting and chipping area; children’s play spaces; massage room; business center and conference room; and a pet spa and dog park.

The development will have a bicycle and pedestrian path around the perimeter that will connect to those in the City of Scottsdale Bicycle Master Plan.

In addition to being adjacent to the freeway, the community will be near the SR-51 and Interstate 71. Optima has agreed to develop a new roundabout on Mayo Boulevard.

Residents will be a five-minute drive to the shopping, dining and entertainment offerings in Scottsdale Quarter and Kierland Commons. The location is less than 25 minutes from Downtown Phoenix, Glendale, Old Town Scottsdale, Tempe, Mesa and Phoenix Sky Harbor Airport.