Office to MF: Fact or Fiction?

Is the transformation of commercial office buildings to multifamily residences hype or hard news? 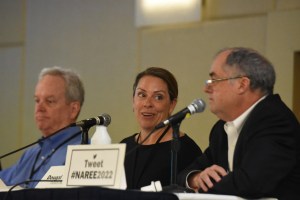 So far, it’s been mostly hype, according to Julie Whelan, global head of occupier research at CBRE, who reported at the recent National Association of Real Estate Editors conference in Atlanta that between 2016 and this year, only 35 properties a year have been converted to apartments or other uses.

But many more conversions are in the offing, the Boston-based Whelan added. And others on the panel with her agreed.

“The jury is still out” on just how much the office market is now overbuilt thanks to the pandemic and the resulting work-from-home movement, said Ed Cross, a developer who is turning the 31-story Tower Life tower in San Antonio’s downtown into a mixed use property.

In his own town, Cross told the meeting of real estate writers from throughout the country, office buildings are 85 percent leased but only 20 percent occupied.

But even if the sector is just 20 percent overbuilt, Cross added, the market can absorb no more than 7 percent, leaving the other 13 percent to founder and leaving lenders holding the bag. Only if lenders sell on the cheap to avoid foreclosure, he said, will developers like Cross & Co. begin to use their ingenuity.

Many buildings are becoming obsolete because tenants are downsizing and moving into new Class A structures, leaving their old buildings with very little chance of filling the vacated space, it was pointed out by the panel’s moderator, reporter Jon Banister of Bisnow.

“Sometimes buildings are worth less than the land under them,” Cross said. “If lenders sell to anyone with dollars, that’s when we can get really creative … . Some lenders are not going to sell for just any number, but they really have to. Lenders have to decide how much pain they are willing to endure.”

Douglas Cameron of Cameron Management, a Texas firm which is transforming the Esperson office building in downtown Houston into residential rental units, agreed with that assessment. Foreclosure is a word we’re going to start hearing again unless banks become very motivated to do something, lest they end up owning some under-performing buildings.

“Once lenders start collecting rent themselves,” Cameron warned, “their properties will lose even more value.”

Fortunately, said Jamie Woodwell of the Mortgage Banker Association’s research and economics group, lenders have “some fresh experience” in dealing with real estate owned left over from the Great Recession. “They will very much react and rely on people coming to them with great ideas. 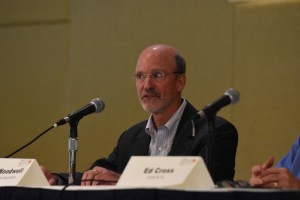 “Some lenders are getting their hands around their problems and the strength of the multifamily market bodes well.”

Cross went further, saying “very big pools of equity money” will be willing to wait the three or four years it will take before their investments begin to pay off.

Of course, to make conversions to work, local government have to cooperate, and “that’s where it starts to get touchy, said Whelan. “Government has to be receptive. Developers are not going to be able to do what they want without it.”

But Cross believes cities are going to be at least somewhat welcoming. “Cities are going to start doing the math, and when they do, they’ll realize they’ll need to partner with developers to preserve their property tax revenues.”

The alternative, obviously, is to tear down older, underutilized structures and start over from scratch. And while Cross said some properties, especially suburban buildings with huge parking lots, will be ripe for demolition, that’s likely to be the exception rather than the rule.”