First units are slated for delivery next summer. 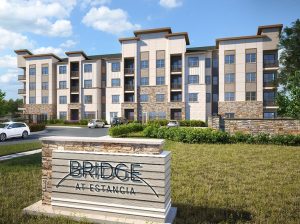 Bridge at Estancia. Image courtesy of The NRP Group

The NRP Group has broken ground on Bridge at Estancia, a 318-unit fully affordable community in Austin. The $70 million project, catering to working families earning up to 60 percent of the area median income, is developed in partnership with The Housing Authority of the City of Austin. The first units are slated for delivery next summer.

NRP Senior Vice President of Development Jason Arechiga said, in a prepared statement, that the demand for affordable housing is increasing in Austin due to the post-pandemic population growth which has caused the housing costs to rise.

Bridge at Estancia is the affordable component of the 600-acre Estancia Hill Country mixed-use development. Upon its completion, the community will encompass one- to four-bedroom units ranging between 650 and 1,256 square feet, with fully equipped kitchens, walk-in closets and granite countertops. Common-area amenities will include a swimming pool, a fitness and business center, a playground and green areas with barbeque stations. The property will also feature support services such as health and wellness screenings, after-school programs and financial literacy training, among others.

The 24-acre development site is some 12 miles southwest of downtown Austin, near the intersection of Interstate 35 and Highway 45. There are many dining options, retail spaces and entertainment venues in the area, as well as several large employment centers.

Also in Southwestern Austin, Industry ATX has recently started construction on a fully affordable community. The 23 attached townhouses will be completed in 2025 and will serve households earning up to 80 percent of the Median Family Income.

Housing Authority of the City of Austin, The NRP Group