Despite a 20 basis-point decline in year-over-year growth, the market remains healthy, according to a Yardi Matrix survey of 127 markets. 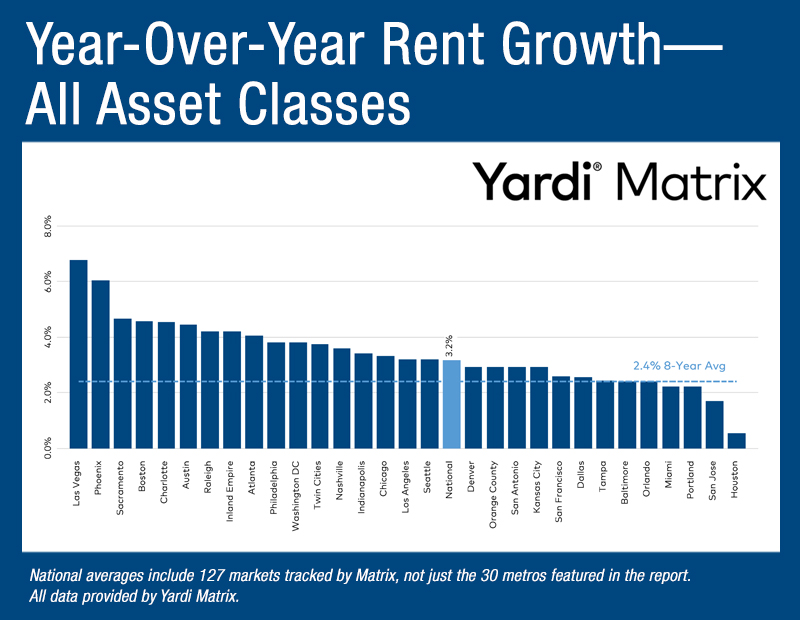 After months of continued increases, multifamily rent growth has now hit a wall—dropping $1 to $1,471 for the month of September. Despite year-over-year growth falling 20 basis points to 3.2 percent, the market remains healthy as 2019 has shown another year of above-average rents, according to a Yardi Matrix survey of 127 markets.

Nationally, rents are up 2.9 percent year-to-date, raising 0.3 percent in the third quarter alone. Although this has been one of the weaker performing quarters, rents are on track to reach 3 percent for the sixth time in the last seven years, notes the report.

In terms of metro performance, Las Vegas continues to lead the pack with a rent growth of 6.8 percent. Following that once again is Phoenix, increasing 6.1 percent. Rounding out the top five were Sacramento (4.7 percent), Boston (4.6 percent) and Charlotte (4.5 percent).

Additional call-out metros included Austin (4.4 percent) and Raleigh (4.2 percent), both of which ranked among the top 10 performers, showed the report, due to “their acclaimed universities and high-paying research and technology jobs,” as well as having “the demographic and economic fundamentals to sustain rent growth even in the face of fairly heavy new-supply additions.”