The national average rent marked a $23 increase in October, to $1,572, according to Yardi Matrix data, continuing its strong performance. 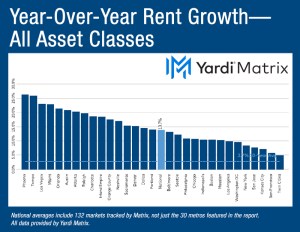 The beginning of the fourth quarter has registered new record growth in national multifamily fundamentals, according to Yardi Matrix’s latest survey: The national average rent rose 13.7 percent year-over-year through October, to a new high of $1,572, while the occupancy rate in stabilized properties rose 1.4 percent in the 12 months ending in September, to 96.1 percent, an all-time high. September also marked the closure of the historical occupancy gap between the two quality segments. Meanwhile, single-family rentals also maintained a robust performance, the average rent rising 14.7 percent on an annual basis.

Since March, the average U.S. asking rent has risen by $179, which is nearly equal to the increase over the previous five years combined. Behind this outstanding growth is demand: Through September, some 475,000 units were absorbed nationally, already surpassing the all-time annual high. Even though office attendance is limited, gateway markets surpassed secondary and tertiary markets in the number of absorbed units, counting 108,000 absorbed units through the past three quarters. However, it’s uncertain for how long this performance will continue, as each of these metros imposes a series of challenges, such as expensive rents, high taxes, crime rates, schools and, more recently, the corporate migration to tech hubs in the South and Southwest and the work-from-home policies.

On an annual basis, roughly one-quarter of Matrix’s top 30 markets posted rent growth of 20 percent or more, led by Phoenix (26.3 percent), Tampa (25.8 percent) and Las Vegas (23.0 percent). In 23 of these 30 markets, rents were up by at least 10 percent, including typically slower ones like Baltimore (13.0 percent), Philadelphia (10.7 percent) and Indianapolis (10.4 percent). Just Minneapolis (4.8 percent) posted an annual rent increase below 5 percent. Double-digit year-over-year rent growth was recorded in other 14 smaller markets, led by Southwest Florida Coast (29.1 percent), Jacksonville (21.7 percent) and Tucson (20.1 percent).