The national average rent increased by just $4 in November, to $1,590, according to Yardi Matrix data, marking the first deceleration since February. 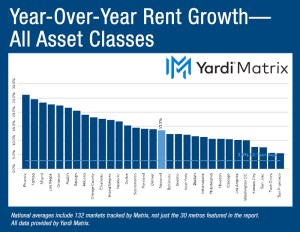 The U.S. multifamily market maintained a healthy performance, according to Yardi Matrix’s November survey, sustained by robust demand and steady economic conditions. But rent growth has finally began softening, the average asking rent inching up by ‘just’ $4 in November, to $1,590. This slight uptick translates into a 13.5 percent year-over-year increase through November. Meanwhile, the occupancy rate in stabilized properties rose 1.4 percent in the 12 months ending in October, to 96.1 percent. The single-family rental market maintained its superiority to the multifamily industry.

The year 2021 maintained the unprecedented aura triggered by the pandemic: Nearly 590,000 units were absorbed in the 12 months ending in October, and more than 6 million jobs were added year-to-date through November. Inflation concerns intensify, despite wage growth.

On a monthly basis, the dynamic is reversed—rents in the upscale segment rose 0.1 percent in November, while RBN units posted a 0.4 percent rent increase. November marks the first substantial decline in asking rent growth. However, although the month-over-month rent increase is a significant drop from the $20-plus monthly increases recorded during the warm seasons, it still marks the largest rent appreciation in the month of November since before the Great Recession, as typically, rent growth is flat at this time of the year.

Only Raleigh and Miami posted rent growth of 1.0 percent in a month-over-month basis, while a dozen metros posted rent declines. The worst performing metros for the month were Seattle (-0.8 percent) and San Jose, San Francisco and Denver (all -0.9 percent).

The current performance in the multifamily market makes forecasting difficult as typical predictors such as rent growth, occupancy and job market post discrepancies. To exemplify, Yardi Matrix points out Phoenix and Las Vegas, both with rent growth above the 22 percent mark, but with some of the weakest occupancy growth; Miami and Orlando, also had rent rise by more than 22 percent, despite consistent new supply expansion and average job growth numbers.

The single-family sector continued to thrive, with the asking rent up 14.3 percent year-over-year through November, and occupancy increase 0.6 percent year-over-year through October. Just like the month before, occupancy declined in nine of the top 30 markets. Miami (40.5 percent), Tampa (38.2 percent) and Phoenix (23.9 percent) led in rent growth, while on the other end of the spectrum were Kansas City (6.4 percent), Seattle (6.5 percent) and San Antonio (6.8 percent). The latter continued to lead in occupancy (up 6.7 percent), alongside Houston (up 8.2 percent) and Austin (up 3.3 percent).