Halfway into the second quarter, national asking rents gained another $19, according to Yardi Matrix data. 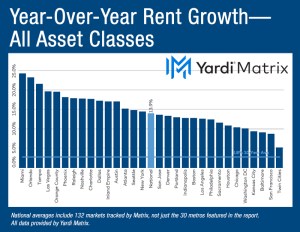 The U.S. multifamily market maintained a remarkable performance, below only that of 2021, according to Yardi Matrix’s latest survey of 140 markets. Although the average national rent growth decelerated by 40 basis points, it still means an increase of 13.9 percent year-over-year through May, which equates to a $19 gain in the asking rent, to a new all-time high of $1,680. Rent growth was up 1.1 percent month-over-month and 3.0 percent on a trailing three month basis; this performance is below the level registered in 2021, but well above any other year. Nationally, asking rents increased by $70 since the start of 2022.

Sun Belt metros remained in the lead in rent growth—Miami (24.2 percent), Orlando (23.2 percent) and Tampa (21.6 percent)—while another 23 of the top 30 markets had asking rents rise by at least 10 percent. The lowest rent gains were registered in Baltimore (9.1 percent), San Francisco (8.7 percent) and Twin Cities (5.2 percent). While gateway metros continue to rebound from the pandemic low as illustrated by the occupancy rate—New York (2.1 percent), San Jose (2.0 percent) and Chicago (1.5 percent)—some high-growth metros exhibited drops in occupancy. Specifically, seven metros posted declines in the occupancy rate, led by Las Vegas (-1.1 percent year-over-year), Sacramento and Phoenix (-0.7 percent). This drop can be attributed in some markets to incoming inventory, however, with the new supply in others on par with the national average, and with the average rent up at least 13 percent year-over-year in each, it can also signal weakening demand.

Current market conditions—decelerating economic growth, concerns about gas prices and inflation—have not meaningfully thinned multifamily demand, nor slowed rent growth. However, the surge in interest rates raises concerns about multifamily pricing and investment activity. The 10-year Treasury surpassed 3.0 percent for the first time since 2018, priced to yield roughly 2.75 percent at the end of May, which is 125 basis points above January levels. The Fed is expected to continue to rise the treasury rate throughout the year, and interest rates will also rise. This is especially important for the commercial real estate industry as it is highly sensitive to the interest rate, being financed with substantial amounts of debt. In addition, borrowing costs have also increased alongside the hike in Treasury yields—most multifamily loans originated before the surge carried coupons of 2.75 percent to 4.25 percent, while these days rates are 125 to 150 basis points higher. Floating-rate debt is more expensive, too, triggered by the increased cost of interest-rate caps. Transaction activity is slowing as investors turn cautious. Property values are down 10 to 15 percent (up 20 percent in 2021), but the change in pricing does not accurately describe the market, as many sellers are holding out rather than accepting lower bids.

The asking rent for single-family rentals rose 12.7 percent year-over-year through May, to $2,038, 50 basis points below April. Occupancy also dropped, by 20 basis points year-over-year through May, increasing in just 10 of Yardi Matrix’s 33 metros. Orlando (49.5 percent), Miami (28.0 percent) and Toledo (21.5 percent) led in rent growth. The SFR sector shows sustained demand, more so with home sales waning due to higher interest rates, which further delays the homeownership dream for many potential buyers. The sector’s performance is also sustained by the competition from institutional investors and the growing preference for suburban housing.