Rents increased by $4 to $1,430 over the previous month, but year-over-year growth dropped by 20 basis points to 3.2 percent, according to a Yardi Matrix survey of 127 markets. 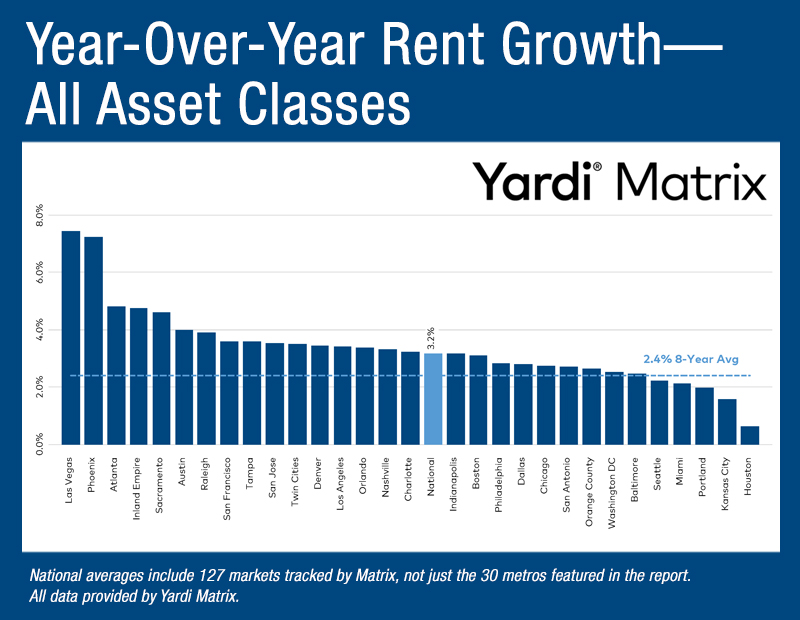 Multifamily rents were up 0.4 percent in the first quarter, showcasing consistent growth, although not as strong as previous years performance, according to a Yardi Matrix survey of 127 markets. Between 2014 to 2016, rents grew at least 0.8 percent in the first quarter. Compared to the previous month, rents increased by $4 in March to $1,430. However, on a year-over-year basis, rents dropped 20 basis points to 3.2 percent.

According to the report, rent increases are “being dominated by secondary and tertiary markets producing a disproportionate share of economic and population growth,” as well as where rents are affordable enough that they can be raised without creating a burden on tenants. These markets offer increasing job and population growth, which is helping rents to continue to rise.

Metros performing with year-over-year rent jumps of 4 percent or higher include Las Vegas at 7.5 percent, Phoenix rising 7.2 percent, followed by Atlanta and the Inland Empire at 4.8 percent, as well as Sacramento and Austin. Smaller metros with gains of 5.0 percent or more include Reno, Tucson and Tacoma. According to the report, 25 of the major markets had rent growth of 2.5 percent or greater in March, and none of the top 30 metros saw rents decline.