Despite another monthly decline, year-over-year rent growth remained at 3 percent, according to a Yardi Matrix survey of 127 markets. 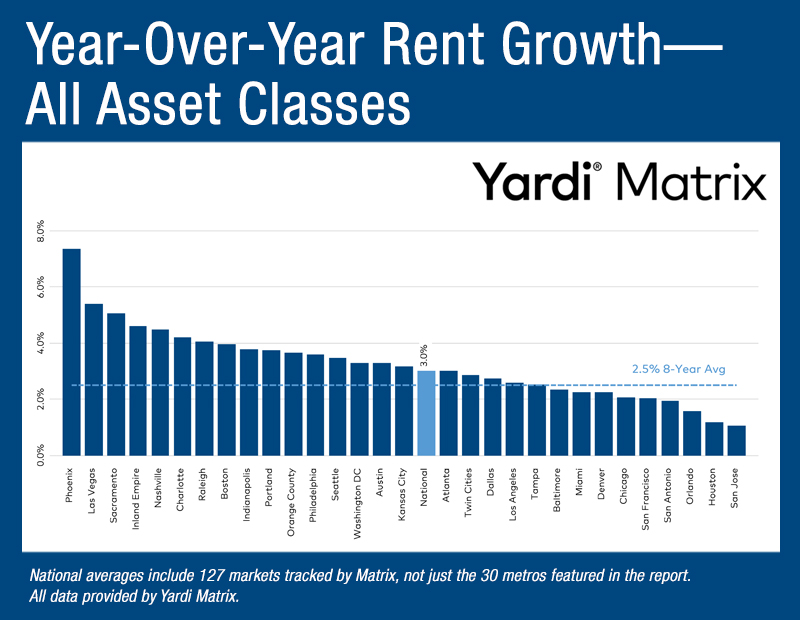 Once again, the average rent dropped in January by $1, to $1,463. This marks the third month in a row to decline, following December’s drop of $1 as well. Despite this, year-over-year rent growth remained at 3 percent, according to a Yardi Matrix survey of 127 markets.

According to the report, month-over-month declines can be attributed to the fluctuating seasons and might continue into the spring months. Occupancy dropped slightly to 94.8 percent but remained within the 95 percent range. Supply deliveries came in above 300,000 units in 2019, but is expected to decline in 2020 as construction loan originations are at a five-year low. This is also in part due to the increased cost of labor and materials.

“The nationwide housing shortage continues to provide wind in the sails of steadily growing rents for both high-end and workforce housing,” according to the report.

Sixteen of the top 30 markets showcased rent growth above the national average and no markets had a negative growth. Phoenix once again was the top performer, showing a rent growth of 7.4 percent. This was followed by Las Vegas at 5.4 percent and Sacramento at 5.1 percent.