Long-term rent growth has been steady at more than 3 percent for the past 12 months, according to a Yardi Matrix survey of 127 markets. 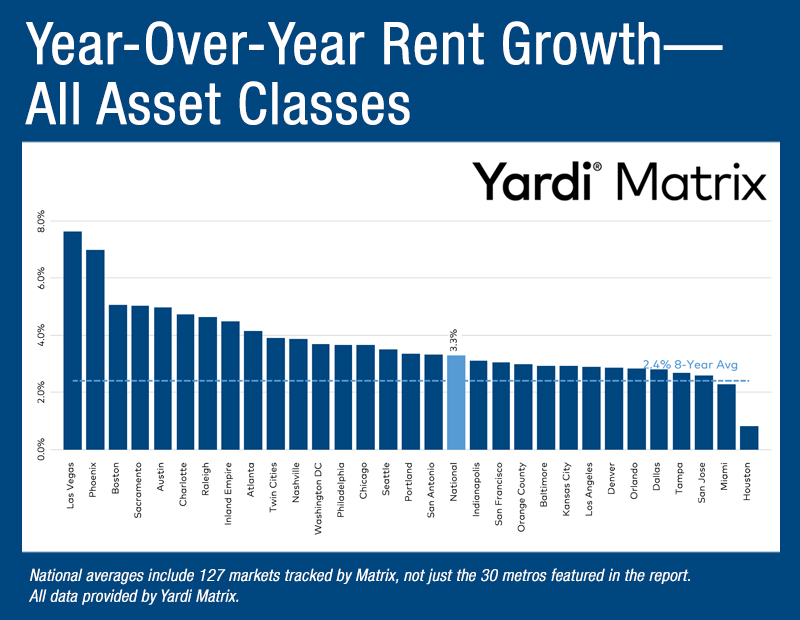 The rental market continues to be a positive performer, showcasing August rental growth of another $2 to $1,472. Despite the monthly increase, year-over-year growth declined to 3.3 percent, according to a Yardi Matrix survey of 127 markets. This, however, has not hindered market performance, as the long-term rent growth amount has been steady at more than 3 percent for the past 12 months and has surpassed the long-term average for the past two years.

According to the report, occupancy rates have dropped 10 basis points year-over-year to 95.1 percent, as of July. Despite the decline, some individual metros are performing positively. Baltimore, for example, has an increased occupancy rate of 40 basis points to 95 percent year-over-year, helping push its rent growth up to 2.9 percent in August. This proves to be impressive for the metro because for several years it has been one of the poorest performing, with rent growth below 1 percent for most of 2018.

When it comes to the highest growing metros, Las Vegas once again led the pack with a rent growth of 7.6 percent. Following that was Phoenix with 7 percent, Boston increasing 5.1 percent and Sacramento up 5 percent. Boston is a prime example of growth coming from markets with “burgeoning technology industries and in-migration of young workers,” said the report. The metro was falling behind in 2018 but gained momentum year-over-year, with “increases in high-paying industries and demand for luxury units.”