April marked the best rent performance since the beginning of the pandemic, according to Yardi Matrix’s monthly survey. 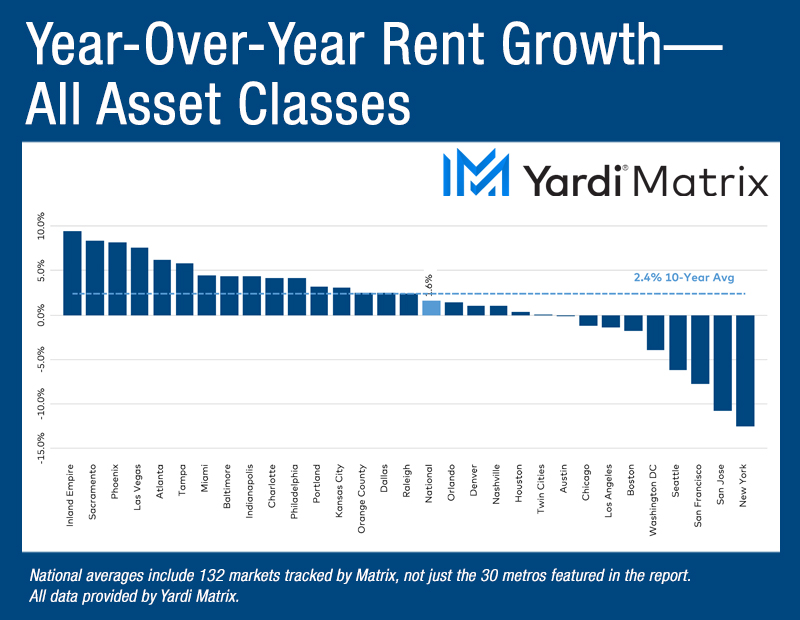 The national multifamily market registered the best performance in rent growth since the onset of the pandemic, according to Yardi Matrix’s April survey. Rents rose 1.6 percent to $1,417 on a year-over-year basis in April, which marks a $10 increase in overall rents, an amount last recorded in June 2015. For the first time since the beginning of the health crisis, all top 30 markets had positive month-over-month rent growth, with 24 of them posting rent hikes greater than 0.5 percent. On a year-over-year basis, of the 134 markets surveyed, 117 posted positive rent growth.

Leading markets for rent growth for the past few years—The Inland Empire (9.4 percent), Sacramento (8.4%) and Phoenix (8.1%)—posted extremely low rates five years ago; over this five-year period, rents hiked by 31 percent in the Inland Empire and by 34 percent in Sacramento and Phoenix. Meanwhile, on a national level, rents rose by 12 percent. Of the six markets that posted negative year-over-year rent growth, Austin (-0.1 percent) had strong month-over-month gains, which will likely turn rent growth positive next month.

The occupancy rate also improved in gateway markets, but properties in the downtown urban cores will likely face a recovery period of up to three years. According to a study of the Yardi Matrix database, one of every 14 multifamily properties has recorded occupancy rate declines of 5 percent or more over the last 12 months. The most significant occupancy drops were in New York, San Jose and Los Angeles. Expected new supply raises some concerns—when coupled with possible scarce demand, it could lengthen the recovery. In San Jose, stock is anticipated to expand by 2.0 percent in 2021 and by 4.2 percent in 2022.