Year-over-year, rents have risen by 2.8 percent, reaching an all-time high of $1,409. Among the top 30 metros, Orlando once again came out ahead with the highest rental increase, at 6.9 percent. 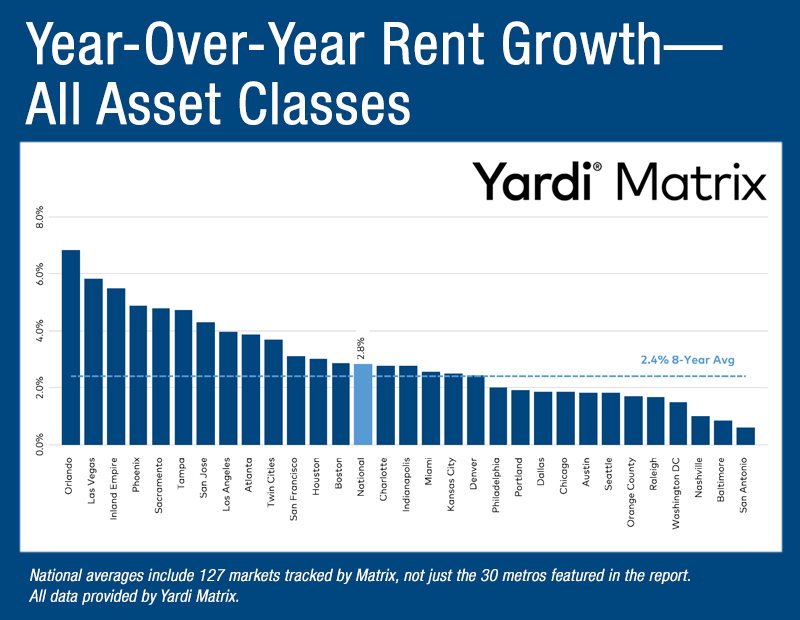 Rents for the month of July increased by $3 to an all-time high of $1,409, according to a Yardi Matrix survey of 127 markets. Year-over-year, rents have risen by 2.8 percent, but decreased 10 basis points since June.

The summer has continued to be positive for the multifamily market, with rents increasing $41, or 3 percent year-to-date. The occupancy rate has increased by 20 basis points, year-to-date, with several metros improving rates due to new supply. Occupancy changes continue to be negative in most of the major markets, but the rate of decline is slowing, while overall occupancy remains within the normal range.

For the top 30 metros, Orlando once again came out ahead with the highest rental increase of 6.9 percent. Following that was Las Vegas with a rise of 5.8 percent, the Inland Empire increasing 5.5 percent and Phoenix with a bump of 4.9 percent. These markets continue to perform the best due to growing employment and relative affordability, according to the report. On the other end, metros such as Washington, D.C. (1.5 percent), Baltimore (0.8 percent) and San Antonio (0.6 percent), are producing slower growth due to the mixture of heavy new supply and a weaker demand.