After a robust first half of the year where average rents grew by $33, there was a summer slowdown, with rents increasing by only $1 in the third quarter. 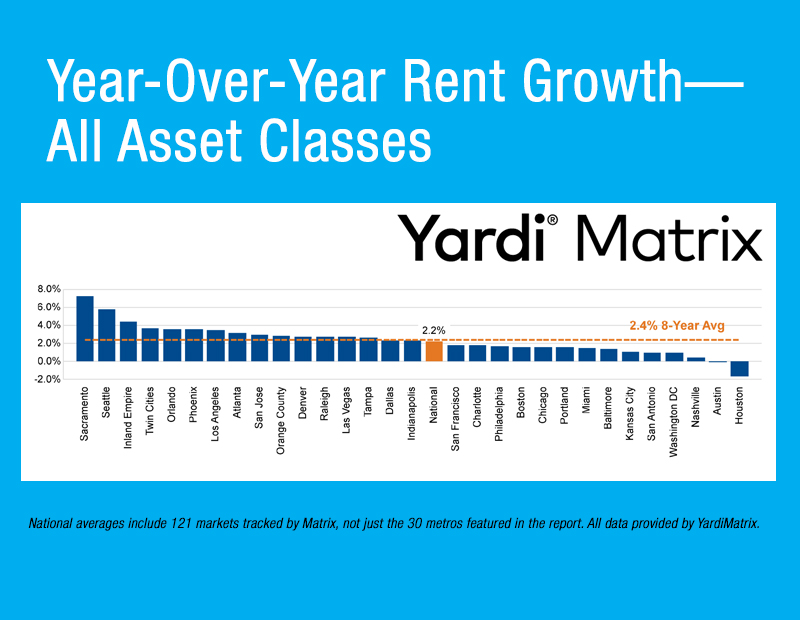 According to Yardi Matrix’s monthly survey, U.S. monthly rents remained flat in September at an average of $1,354. Based on 121 markets, the report revealed that rents continue to decelerate on a year-over-year basis. During September specifically, rents took a 10-basis-point downturn from August, a 2.2 percent increase nationwide. After a robust first half of the year, during when average rents increased by $33, there was a summer slowdown, with rents increasing by only $1 in the third quarter.

During three quarters this year, rents grew 2.6 percent, a healthy but incomparable figure to the enormous growth seen in the sector in recent years. During the first three quarters of 2016, rents rose 2.6 percent, during the same time period in 2015 they rose 4.9 percent, four percent in 2014 and 3.1 percent in 2013. “Rent growth tends to slow down in the fourth quarter, when fewer people move, so if things hold to form, gains for the year could be already baked in,” the report states.

Whether average rents grow depends on the state of the economy, the pace of new construction, and in some metros, the impact of the recent hurricanes. Demand is expected to stay strong as the economy is producing 150,000 to 200,000 jobs per month, per the report. Though 480,000 apartment units are under construction, the number of deliveries has dropped throughout the year. According to the August survey of the National Federation of Independent Businesses, 88 percent of construction firms surveyed said they found it hard to fill construction jobs. This labor shortage is anticipated to worsen in some places as workers travel to Houston and Florida to assist in disaster relief and rebuilding efforts. More than 50,000 multifamily units were damaged in Houston, where the multifamily market should improve as displace households find temporary relocations.