Apartment inventory in the Raleigh-Durham area expanded by 1,020 units during Q1 2014, a slight decrease from 1,340 deliveries in the last quarter of 2013.

According to research data from Berkadia, the Hillsborough submarket saw the greatest number of additions, with 250 units.

Average asking rent reached $891 per month in March, increasing by 1.8 percent year-over-year and by 0.6 percent since the end of last year.

Also by March, multifamily permitting activity rose 15 percent since the beginning of the year. Developers submitted permits for 7,540 annualized units, down 2 percent from the same month in 2013.

The median price for single-family homes in the Raleigh-Cary area reached $205,350 in March, a 12 percent increase year-over-year, while the median home price advanced 8 percent in Durham-Chapel Hill to $199,000.

As for the area’s employment, during the first half of 2014, Raleigh-Durham companies created 14,400 jobs, a 1.8 percent year-over-year increase.

Supported by the growth of technology firms, the 2014 mid-year employment rate outpaced the 1.6 percent increase of the preceding year. 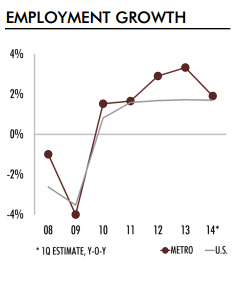 Government employment since March 2013 led the metropolitan area with 3,900 new positions, followed by the professional and business services industry, with 3,300 additions. One of the most notable employers was HCL Technologies, a company that created 200 new call center jobs within the same period.

Software company Red Hat Inc. announced it would hire at least 600 employees, while MetLife plans to employ 1,200 workers at its new technology hub currently under construction in Cary.

During the first half of the year, the population in Raleigh-Durham increased by 1.9 percent since mid-2013, the same growth from the previous year.