Housing policies are in the spotlight in the national election and in many statehouses around the country. Here's a look at what's at stake in 2020.

Every election year brings with it challenges and potential for change, but the multifamily industry in 2020 faces a crossroads on many key issues that will impact the industry for years.

Issues such as housing affordability/rent control, how regulations are shaped and enforced and the reform of the government-sponsored enterprises Fannie Mae and Freddie Mac will be deeply impacted by legislative action and the outcome of the national election this year.

The apartment market has had a decade-long run of robust performance, and the outlook for 2020 is generally favorable. Rent growth has been above-trend in most metros over the last five years as demand remans strong and occupancy levels are a solid 95 percent nationally. Property values have soared to record levels as investor demand has driven acquisition yields to the 5-percent range for all but the riskiest multifamily assets.

Despite the prolonged prosperity, however, industry executives fret over the regulatory environment and the difficulty in producing housing that is affordable to low- and middle-income Americans. The strong demand for rental housing that has buoyed occupancy rates, supply constraints after the last downturn, the rising cost of new construction, and weak income growth have served to create a shortage of workforce housing.

What Qualifies as Workforce Housing?

According to the National Multifamily Housing Council, since 2000, the number of households pay more than 30 percent of income on rents has doubled and now represents about one-third of renters. During that time, the U.S. has produced a deficit of more than 3 million rental housing units that are affordable to households earning less than $75,000 per year.

The rising cost of construction is a huge factor in the lack of workforce housing. Washington, D.C., based NMHC says that construction and labor costs have risen nearly 60 percent and land costs have roughly doubled since 2000. At the same time, growth in regulatory burdens have saddled developers with extra costs and longer construction periods, which also adds more 30 percent to the cost of multifamily properties, according to NMHC.

As a result, more than four of five units being built today are targeted for high-end renters. According to Yard Matrix, of the 712,000 multifamily units under construction as of January 2020, 84.3 percent (601,000) are categorized as Lifestyle, or luxury units, while only 9.3 percent (66,000) are subsidized fully-affordable units and only 5.4 percent (44,000) are classified as Renter by Necessity for workforce housing. Of the 304,000 units delivered in 2019, 84.9 percent are luxury units, while 9.1 percent are fully-affordable and 5.3 percent are Renter by Necessity housing.

The cost of construction and political demands create a conundrum for the industry. Developing affordable apartments means building more units, lowering the cost of construction and/or providing more subsidies. Achieving any of these solutions is a struggle. Although there are some national standards, most development is approved at the state and local level, which means fighting NIMBY-ism and creeping regulatory burdens involves numerous battles with jurisdictions around the country. The goal is to streamline approval processes and update outdated zoning laws that were implemented in many municipalities up to 100 years ago and fail to meet the needs of the modern economy.

Commercial development tends to be politically unpopular, but industry advocates have had some success— for example, a fledgling YIMBY (Yes In My Backyard) movement to support housing development has sprung up in areas as far flung as New York, California and North Carolina. Some metros such as Minneapolis have passed laws that allow upzoning for more density, which is another way to provide less expensive housing.

NMHC and industry advocates also are working to increase the use of subsidies for low-income tenants. The federal department Housing and Urban Development has budgeted $16 billion for its Section 8 voucher program. Despite the popularity of the program—the waiting list averages 32 months— the Trump administration is seeking to cut the program. 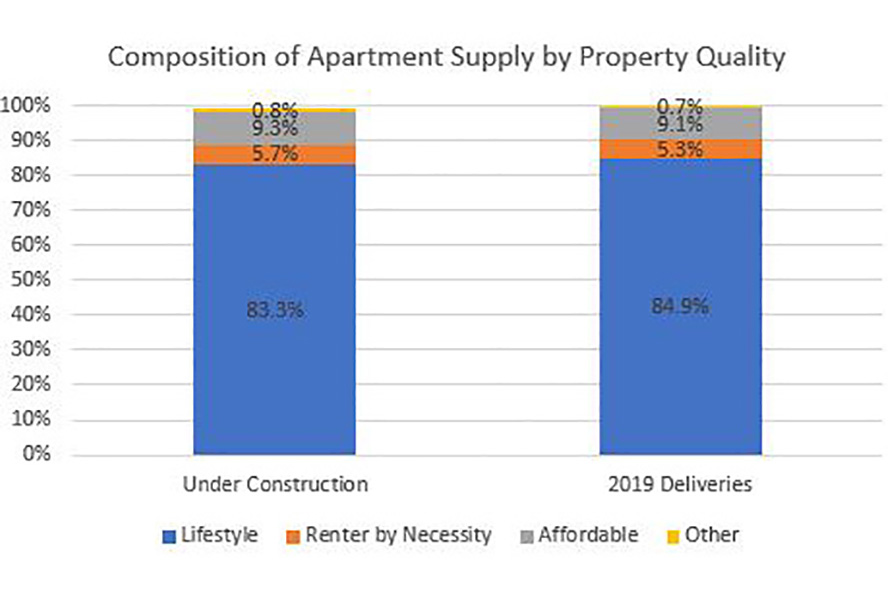 Calls for Rent Control Get Louder

The decreasing level of affordability has led to a revival of rent control measures. California, Oregon and New York passed new measures in 2019 and other states—including New Jersey, Colorado, Illinois and Nevada—have had legislation proposed. The issue has made its way into the presidential election, as one major candidate—Bernie Sanders—has called for national rent control.

Although it sounds appealing as a method of increasing workforce housing, rent control can have the opposite effect over the long term by decreasing supply and discouraging investment in housing. Fighting rent control is a signature issue of the NMHC.

What’s Next for GSE Reform?

After years of stalemate and inaction, Federal Housing Finance Agency director Mark Calabria has made reforming Fannie Mae and Freddie Mac a priority, and it appears that major changes will be in store. The GSEs have been operating under conservatorship since the height of the financial crisis in 2008. The Obama administration implemented cash sweeps that swept profits into the federal treasury.

Despite the uncertainty about their status, in recent years the GSEs have been operating at full steam, recording record high volumes every year.  Fannie and Freddie combined to originate just over $150 billion of loans in 2019, about 40 percent of all multifamily lending. The status quo became hard to change considering the model was working well and there was no reform plan that could garner a majority of votes in Congress.

Last September, Calabria announced that Fannie and Freddie would be capped at $100 billion of loans apiece for the five quarters through the end of 2020. That allows them to originate a combined $160 billion in 2020, with the caveat that at least 37.5 percent be dedicated to loans on properties with affordable components. Calabria also allowed the GSEs to begin keeping their profits as a prelude to building up a capital base that will be needed to exit conservatorship.

The question now is what happens next? Privatizing Fannie and Freddie comes with some complicated issues. One possibility is that they could go public and raise capital through a stock offering. How much capital they could raise, and the cost of it, would depend heavily on whether they have an explicit guarantee from the federal government.

The GSEs have long operated with an implicit guarantee that the federal government would backstop losses. That enables them to have a cheaper cost of capital than competitors. Many in the industry believe, however, that the guarantee should be explicit, ending all the uncertainty and the wink-and-a-nod way of doing business. An explicit guarantee, however, would have to approved by Congress and signed by the President, which isn’t seen as possible with the makeup of today’s government.

While there appears to be significant progress on the future of the GSEs, the precise nature of reform will depend on who wins the presidency and controls Congress. Divided government makes change more difficult, even though there seems to be bipartisan desire to make changes.

As affordable housing becomes a bigger issue in the public consciousness, the industry will find itself in the policy spotlight. Solutions—both legislative and regulatory—vary widely by state and elected officials. How the industry will cope depends greatly on how effectively its voice will be heard and who is in office in 2021.

―Paul Fiorilla is director of Research for Yardi Matrix.