In her current position as vice president of acquisitions and asset management for Chicago-based Urban Innovations, Monica Makin is an advocate for expanding affordable housing opportunities for seniors, workforce and low-income residents. 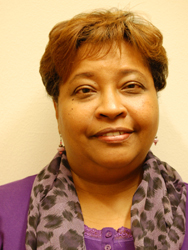 After becoming the first person in her extended family to graduate from college and continuing on to law school, Makin eventually found her way back to the affordable housing realm in a very different capacity—as an expert in Section 42 tax credit program and the HUD Section 8 program. She has worked on development and asset management in both Oregon and Illinois.

“My real passion is preserving the integrity of this industry and of the affordable housing programs. I recognize that there is such a need type of programs, from personal experience as well as working in the industry,” Makin says. “Where I grew up, the building I lived in was nothing I would want my kids to live in. The product we produce now, I would gladly live in.”

She described an unsafe, unsanitary environment in the Marcy Houses, hearing gunshots at night and smelling urine in the elevator. New York Magazine summarizes: “At Marcy, the hard-knock life presses on.”

In her current position as vice president of acquisitions and asset management for Chicago-based Urban Innovations, Makin is an advocate for expanding affordable housing opportunities for seniors, workforce and low-income residents. She sees affordable housing programs that provide housing for these groups as being constantly threatened by funding cuts—while at the same time, the need is rising.

Read on for our interview with Monica Makin.

Makin: We have 3,700 units under management, in Illinois, Pennsylvania, Indiana and Kentucky. Most of them are project based Section 8, so they provide housing to seniors at 30 percent area median income (AMI). These are people on fixed incomes, who have retired, and are typically living on social security or pension income.

MHN: What challenges have you experienced in this sector?

Makin: We have seen a higher demand and need for senior affordable housing, while at the same time resources to help in the development of affordable housing are being cut. Chicago in particular has experienced cutbacks in senior services. We look for partners to provide services to our seniors, for example, we partner with Catholic Charities for food boxes, and with a non-profit called HOME for transportation. Because of cuts in the public sector in senior services, we have been put into the position of seeking out partners to provide these services, because we are not staffed to provide them. That’s not what we do.

MHN: What makes you stand out from other senior housing providers?

Makin: When we develop a property, we really take a long-term view. We’ve never sold a property we’ve developed. We put the money in and know that it will last a long time. We have a philosophy that we’re not going to use cheap product, because you end up paying it back later when you try to build too cheap. So we really try to put a lot of money and high quality product into our projects. We get rewarded for it when our projects are inspected by HUD. We usually score the highest you can score on physical inspection—generally our HUD Real Estate Assessment Center (REAC) scores are between 90 and 100. I think that distinguishes us. Also, our management style is very hands on, and we really try to make it so tenants feel that this is their home—a space they are proud to be.

MHN: How are you responding to the increased demand for affordable seniors housing?

Makin: In the last few years, a lot of people who have lost homes or a significant part of their next egg and are now looking in our projects for housing, and we don’t have any space. In addition, because of the cuts in funding that make these developments happen, there is not a lot of new product being developed to meet this need. So, what we are left with is an aging population; I mean just because resources dry up doesn’t mean people have stopped aging, and they still need somewhere to live that they can afford.

There’s a greater need than we have in supply. And we can’t increase supply if the resources are drying up. There is a public policy trend of seniors not being as much as a priority as other populations. That has been a scary trend I’ve seen over the last 15 years I’ve been in this industry.

MHN: You’ve expressed concerns about the low income tax credit. Can you elaborate?

Makin: The low income tax credit program is a great program enacted by Ronald Regan. It was designed to address the housing needs of working families and provide affordable housing to people of low to moderate income.

Over the years, (I started getting into affordable housing in 1995) I’ve just seen the program morph into something that it wasn’t designed for. The program is now being used to fund social policy rather than housing needs and when it doesn’t work, the program is blamed rather than the way it is being utilized. It’s disturbing to me to see politicians make these funding decisions, on a public policy level, in a two- to four-year window. Public policy now changes every two to four years. But that’s not how you plan for an aging population. It’s getting harder and harder to find a way to financially make these projects work.

As a citizen, I see politicians take very complicated issues and drill them down to these little sound bites. Which is fine if they were just talking on TV, but when they actually translate that into legislation, that’s very scary to me.

MHN: Tell us about the workforce housing you’ve proposed in Oak Park?

Makin: Workforce housing is a growing need. This is housing for people who are employed but don’t have low enough incomes to qualify for Section 8, and also don’t make enough to comfortably afford market rent. I think there is a need for this in Oak Park, where rents are high. For a one bedroom apartment, you’re talking over $1,000. With this proposal we would be able to set rents at least 25 percent below market. This would be housing for people who make between $20,000 – $35,000 a year. People like retail and service workers who may only make $10 – $15/hour.

I’ve assembled a team and found private funding for this proposal: a mixed-use, mixed-income project in the Village of Oak Park that has affordable units for workforce housing as well as market-rate units, with a retail component that’s right across from the Green Line at South and Harlem. We are still waiting to hear from the Village as to whether they accept our proposal.

MHN: Can you tell us about your personal experience growing up in affordable housing in New York City?

Makin: My dad was a short-order cook and my mom worked for the city. We didn’t have a lot of money to afford New York City prices. We had a three-bedroom apartment, in New York, on those salaries, and that was only possible by living in the public housing projects. But they were unsafe, crime infested and not very clean. It wasn’t just Marcy, there were a lot of housing projects that had the same issues which arise when you pack a large number of people together in little boxes. That’s why we don’t build those types of projects anymore, and they’re getting torn down all around the country. It was a social experiment that didn’t really work.

MHN: Why did you decide to go from practicing law to focusing on affordable housing?

Makin: It was an easy transition. I got into law because, like many young people, I wanted to change the world. I quickly discovered that working for a large firm may not be the best way to achieve this goal. So I set my sight a little smaller. There are a lot of social problems in the world. I decided a long time ago that my one little contribution would be to try to provide people with a decent, safe, affordable place to live. That’s what we try to do here at UI. It’s pretty simple. We’re not trying to solve all social ills; I’m just trying to my part in addressing one of them.