Aaron Miripol heads up a non-profit real estate company that is working in unique ways to improve struggling neighborhoods around Denver, and simultaneously having a big impact on regional, transit-oriented affordable housing. 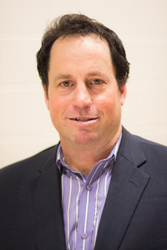 Denver –A member of his staff at the Urban Land Conservancy of Denver described CEO Aaron Miripol as “the most passionate person I have ever worked with”—talk with him for just a few seconds and you’ll understand why.

Miripol heads up a non-profit real estate company that is working in unique ways to improve struggling neighborhoods around Denver, and simultaneously having a big impact on regional, transit-oriented affordable housing. Engaging community stakeholders, working collaboratively with government, non-profit, philanthropic and private partners, and thinking out of the box are among the organization’s strengths. It draws from a wellspring of energy and enthusiasm from its CEO.

Here are a few highlights from MHN’s interview with Aaron Miripol.

MHN: You grew up on the South Side of Chicago in the late 1960s and early 1970s. How did that experience influence you?

Miripol: South Shore was a very accepting community. I now recognize the issues that were going on which at the time I didn’t understand. This was the early seventies and Chicago, like a lot of urban communities, was going through a major transition. The neighborhood was redlined by banks and block busted by realtors. A lot of African American families living in South Shore were buying homes at inflated prices, and unable to get traditional financing because the Federal Housing Administration (FHA) would not lend in our community.

MHN: Then you ended up as a tenant organizer in Chicago right out of college. What was that like?

Miripol: As tenant organizers, our job was to work in buildings that were owned by slumlords on Chicago’s Northside. It could be a utility shutoff or any other major problem for those living in the property. We would work with the residents to get the buildings put into court receivership in order to get the heat back on. Slumlords would try to intimidate us and make sure residents didn’t participate in the court receivership, taking away their rights to live in a stable environment. I had many threats as an organizer, and that gave me a perspective on the challenges of urban real estate that isn’t well maintained. It would be the middle of winter and the heat would be shut off, because the landlord hadn’t paid the utility bills. But the tenants still paid rent.

It was an eye-opening experience and it made look at how you prevent this situation in the first place. Our organizing role was very reactive, working with residents to get buildings into receivership and getting the heat turned back on or whatever the issue was. But what could we have done up front? There was a robust non-profit development community in Chicago, and as an organizer I worked with these folks. That’s what got me engaged to be on the front end of place-based real estate development work.

MHN: Fast forward to about 15 years ago when you moved to Colorado to work in the affordable housing sector. What motivated that change?

Miripol: What drew me to Colorado was the opportunity to work on the development of community land trusts (CLT). CLTs create permanent affordable ownership because a non-profit owns the land while the homeowner or business owner owns the house or building. When I was in Chicago as an organizer, we had looked at doing a CLT, which did not move forward. This was extremely unfortunate, as it would have directly benefitted working families in need of affordable housing. At Thistle Communities in Colorado (Ed: Where he was CEO for nine years before moving to ULC), they were in the midst of starting a new mixed-income community with 57 homes, 49 of them in a CLT. That’s what drew me to taking the job, the opportunity to build CLTs and become a true steward of the real estate.

MHN: Have you used that approach to property ownership in your work at ULC?

Miripol: Yes, especially for our community center project at Holly Square in northeast Park Hill. It’s in a focus neighborhood for ULC. The old Holly Shopping Center was firebombed in a gang retaliation arson attack in 2008. We were approached by the city to see if ULC would be willing to step in and buy this property, and we jumped on the opportunity.

We didn’t just buy a property and decide what to build. We worked with the community to figure out what made sense. A key partner, Strengthening Neighborhoods, a program of the Denver Foundation, worked with us to gain the trust of the neighborhood. They had been working in this community for over a decade, and because of their community connections, were able to bring a very strong group of stakeholders to the table to talk about and plan what development should happen at the site. Five years later, we’ve got this amazing playground, lively basketball and futsal courts and a new Boys and Girls Club center, which has shared space housing several nonprofits.

Using the community land trust, we have a 99-year ground lease under the Boys and Girls Club building, which guarantees the property will benefit the community for generations.

MHN: What implications do that have for their use of the property?

Miripol: It’s the first time the Boys and Girls Club has agreed to doing a ground lease anywhere in the country. I give them a lot of credit for being willing to try something new, and create a commercial CLT. If the Boys and Girls Club decided to sell their building 20 to 30 years from now, because we own the ground, ULC can guarantee that whatever replaces the building will have a community benefit.

MHN: ULC is also very involved in transit-oriented housing. Tell me about that.

Miripol: RTD FasTracks (the regional initiative to expand public transit networks around the metro Denver region) has really helped get people to focus on the infrastructure and transit oriented development (TOD) locations, and begin to push density. Fifteen of our 20 investments have a direct TOD connection.

The region has done a very good job in the planning and thinking about the build out of FasTracks. A 2007 study said that by 2030, in excess of 150,000 units of housing would be added along the transit corridors. That’s over 10 percent of the current housing stock that we have in the region, and that means density is needed. About one-third of that housing stock would need to be affordable–more than doubling the current restricted regional affordable housing stock. That’s huge. These opportunities that exist around transit corridors are critical.

MHN: You raised and deployed a TOD-focused development loan fund, and are now gearing up to do a second funding round. What’s the next step in that process?

Miripol: The $15 million Denver TOD fund we raised with the City of Denver and Enterprise Community Partners, was the first affordable housing loan fund dedicated to transit in the country. We successfully deployed the full $15 million in only three years on eight transactions; three deals have already been paid back. But we’re only scratching the surface. Where we still fall short as a region, is truly committing to adding 45,000 units of housing that are going to be permanently affordable. There is so much more we can be doing and be more effective at, especially on a regional level.

As a non-profit business, serving low-income and working folks, we know that being near transit is critical. A number of TOD sites are the most expensive pieces of land to buy in the region, and up-zoning of these sites provides more density, which in turn increases the cost of the land. That’s part of the challenge, and I think as a region we have a lot more work to do in being clear about how we create not only affordable housing, but also other services and uses at these transit sites. There needs to be commitments to the nonprofit community, like day care centers, schools, health clinics, healthy food sources as well as affordable places people can call home.