October's rent growth numbers marked the biggest drop in three years, but a new report from Yardi Matrix states that the recent deceleration is no cause for concern. 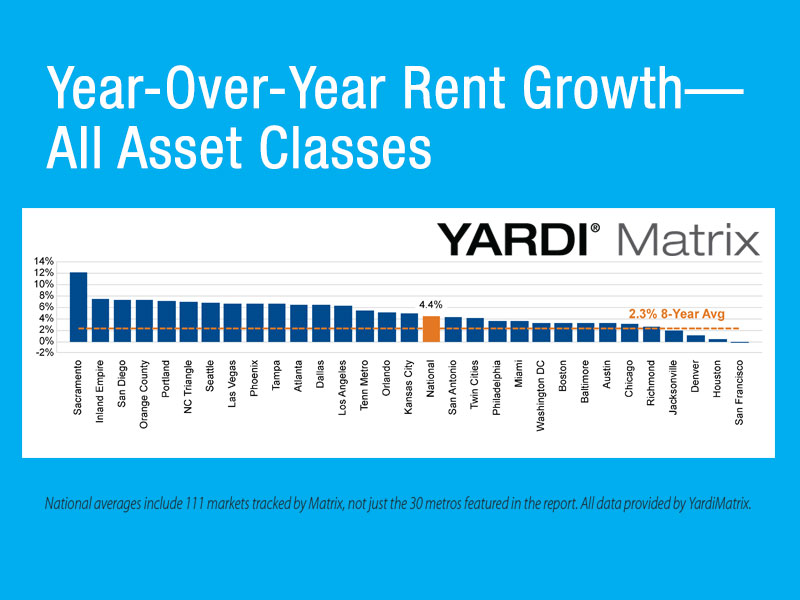 The past month’s decline in rent marked the largest in three years with average monthly rents falling by $3 in October, according to Yardi Matrix’s monthly survey of 123 markets. At $1,216, the country’s average rent growth has dropped the most since the average fell by $3 in October 2013. On a year-over-year basis, rents grew 4.4 percent, a 30-basis-point decline from September, and a 230-basis-point decline from the recent high in October 2015 of 6.7 percent. According to Yardi Matrix’s report, “The decline demonstrates a reversion to more ‘normal’ rent growth that we forecast at the beginning of the year.”

Given the recent super-sized growth in many metros throughout late 2015 and 2016, deceleration has been imminent. Sacramento has shown the most surprising year-over-year growth at 12.1 percent as the only metro with growth above 7.4 percent. A saturation in high-end and luxury apartments has “effectively put a lid on rent growth in some metros,” the Matrix Monthly report stated. However, growth and demand remain high for lower-cost rent-by-necessity units.

While deceleration may seem alarming, the report assures that it is not an indication of an oversaturated market. Fundamentals continue to be strong, and occupancies remain close to cyclical highs. The continued trend of a growing population and strong job growth keeps producing more new households, which in turn spurs demand for apartments. Matrix reports that 26 of the top 30 metros are above the 2.3 percent long-term average for rent growth, and that is expected to continue in most places. Markets like San Francisco, Houston and Denver, which have dropped swiftly as of late, have unique issues with supply, affordability or job growth.