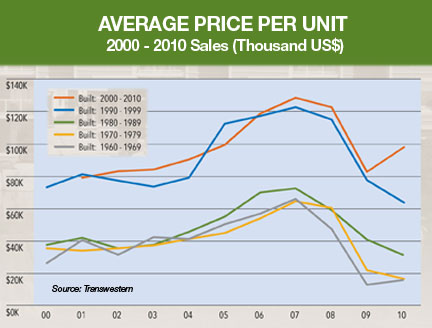 Phoenix–In a move that seems to signal the emerging recovery of Phoenix’s multifamily market, Transwestern’s Phoenix office recently negotiated the sale of the 258-unit Monterra apartment community for $16,650,000.

But that doesn’t mean the city’s economy has recovered just yet; in fact, apartment rents and occupancies remain stagnant. Net rental incomes in the Class A and B product are about the same as they were 10 years ago, Hannum reports. And incomes in Class C assets are equivalent to about 15 to 20 years ago.

“With that, you’ve seen pricing decline significantly since the peak in 2006 and 2007,” Hannum tells MHN. But pricing appears to have hit bottom—or is at least close to doing so—giving those buyers who have been sitting on the sidelines the incentive to act now.

“For the groups that are looking to acquire 2,000-plus [units], they are not so concerned with timing the bottom precisely. They believe it will take another 12 to 18 months before net rental incomes move upward, and they are fine with that, but they are buying at prices that are well below replacement cost. Once employment comes back, net rental has nowhere to go but up.”

Class A properties are currently priced at $80,000, on average, with Class B assets averaging $40,000 per unit. Meanwhile, Class C product is trading in the mid-teens to low-20s, Hannum reports.

Not surprisingly, then, about 80 percent of all multifamily sales in the Phoenix area have been for 1980s and earlier product. “I think you’ll see a lot more of the Class B-minus and lower quality assets come to market from lenders and special servicers—deals that were pricey back in ‘05-‘07—and many of those buyers don’t have the ability to recapitalize and structure a workout done with the lender. With the Class B-plus and higher asset, those groups are likely to have the opportunity to modify their existing financing,” Hannum adds.

While rents and occupancies in the Class A and B product have hit bottom and remain flat, the C market could continue to experience some pain. “The big question is going to be the impact of the immigration law that goes into effect later this month,” Hannum points out.

So what’s in store for the recovery? The city’s affordability, including the declining cost of doing business, makes it poised for a recovery—which many believe is on the horizon.  Hannum notes, “the majority of investors that we talk to believe that by 2013 the Phoenix economy will be doing very well.”