Orlando recently made the top 10 list of Forbes' Next Big Boom Towns. While the market did not perform particularly well in the recession, it has more jobs now than it did at the turn of the century.

Orlando, Fla.—Orlando recently made the top 10 list of Forbes’ Next Big Boom Towns. While the market did not perform particularly well in the recession, it has more jobs now than it did at the turn of the century.

“The market is hot,” says Kevin Judd, principal, ARA | Florida. “People are bullish on Orlando, and the reason for that is diversity in jobs.”

The bottom of the market is perceived to have taken place in 2009, when it lost about 6 percent of its labor force, reports Judd. The market began to rebound in 2010, with approximately 25,000 jobs already brought back. In fact, the market gained 10,000 jobs from November 2010 to November 2011. “A lot of those have come through the entertainment sectors—Disney and SeaWorld and Universal,” Judd tells MHN. “That concerns some people, but when you look at historical economic dips and upswings, those kind of jobs are the first to pop up.”

The strongest growth in the apartment market has been in the Class A and B assets, though Judd notes that it’s location that continues to play the most important role in performance. 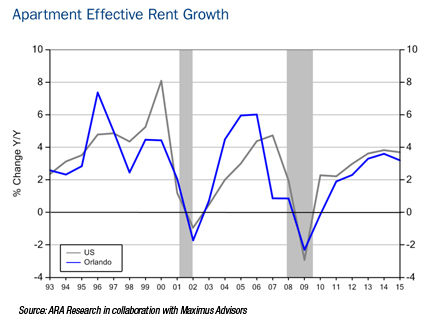 On average, occupancy is in the low- to mid-90 percent range, up from the mid- to high-80s a few years ago. Additionally, concessions continue to burn off across all asset classes, with rent growth in the 3 percent to 8 percent range.

“It is very location-driven,” Judd emphasizes, “so some of the more suburban properties—some of the properties that are tucked away and not easily accessible—would be on the lower end of that range.”

Meanwhile, rent growth is anticipated to continue to be in the 3 percent to 5 percent range over the next few years, with assets in the core infill locations, such as Winter Park, Maitland, Altamonte Springs, Lake Mary and Heathrow, expected to experience the strongest performance.

As far as the shadow market, most of the impact from the condo conversion craze has waned considerably, Judd tells MHN. However, he adds, the single-family market can potentially be challenging, as there is much available suburban land around Orlando. “There are already single-family home builders that are trying to get out and build, and they’ll be less expensive and will potentially compete for rental dollars,” he points out.

At the same time, the development pipeline is relatively small. While 2010 saw the addition of 1,300 units, Judd points out that 4,300 units were absorbed in that same period—the most since 2001. (To draw a comparison, the market experienced 8,000 to 10,000 new units annually at its peak.) This year, the market expects to see the completion of about 3,000 units.

Meanwhile, transaction velocity has picked up significantly over the past two years, says Judd. In central and north Florida (which, in addition to Orlando, ARA counts as Tampa and Jacksonville), ARA has tracked an 80 percent increase in deals since July 2007. This pretty much runs the gamut, from banks listing deals through servicers to Class B and even some Class A. 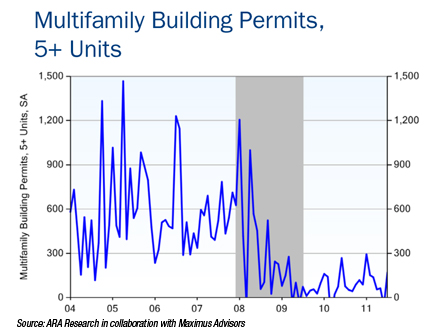 While the market’s peak in pricing was during the condo conversion craze, where assets could sell between $175,000 to $200,000 a door, Judd points out that cap rates today are as low, if not lower, than they were at the market’s peak (for market-rate product).