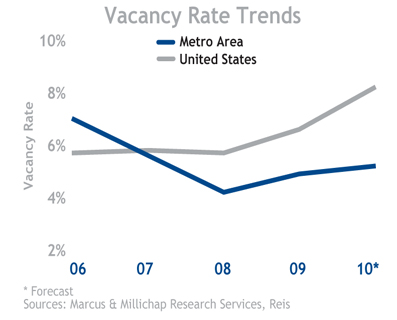 Madison, Wis.—The Madison, Wis. apartment has hit bottom, and with its lack of new construction and relatively healthy economy, it is poised to make a strong rebound, assuming the shadow market does not have too much of a negative effect.

“While it certainly has been affected by the national economy, Madison has always been a very resilient, near recession-proof economy because of the concentration of university jobs and government employment,” notes Matt Fitzgerald, vice president of Marcus & Millichap’s Madison, Wis. office and regional manager-mid-market offices.

Though vacancy has risen slightly during 2010, it has remained relatively low at just over 5 percent, a point that it has remained at for the past three years, Fitzgerald tells MHN. And only 330 units are slated for delivery this year.

Asking rents, however, declined 0.7 percent, and concessions have also been on the rise.

While most of the news is positive for Madison, Fitzgerald does acknowledge that the market has yet to see whether there will be any effects from the shadow market. “We do have condo stock that hasn’t performed as planned, so the growing threat of those units reverting back to the rental market is something everyone is keeping their eyes on,” Fitzgerald reports.

“Being a secondary market in Wisconsin and a tertiary market nationally, we were a little behind time-wise in terms of construction, so we’ll lag behind other markets where those projects have been around a little longer and banks have made moves,” he adds.

Nine sales over $500,000, which equates to about 850 units, have occurred since the beginning of 2010, Fitzgerald reports. Cap rates are in the 7 percent to 8 percent range. “Like every market, we’ve seen cap rates now that are reflective of actual income, rather than pro forma, which has affected value.”