According to the U.S. Census Bureau and the U.S. Department of Housing and Urban Development, starts of buildings with five or more units continued to show wide swings on a monthly basis. In December 2016, these buildings rose by 53.9 percent to a seasonally adjusted annual rate of 417,000. The significant change over the month of December follows the 38.7 percent drop in November. In October, that amount rose by 72 percent, erasing the 39.1 percent fall in September. 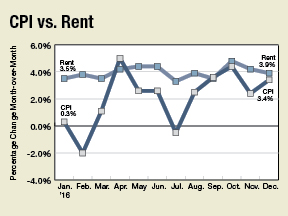 The headline consumer price index (CPI) rose by 2.1 percent over the past 12 months ending in December 2016. This is the first time since June 2014 that inflation has reached or exceeded 2 percent. The growth in the CPI over the year partly reflects a 5.4 percent increase in energy prices. However, food prices fell by 0.2 percent over the year reflecting declines in the first half of 2016 and then stagnancy in the second half. Excluding historically volatile food and energy prices, “core” CPI rose by 2.2 percent as shelter costs, the major component of the index, rose by 3.6 percent. Rental prices, a component of the overall shelter costs, grew by 4 percent over the year. Since the increase in rental prices over the past 12 months exceeded the rise in overall inflation over the same time period, as measured by core-CPI, then NAHB’s Real Rent Index rose, increasing by 1.7 percent over 2016. More precisely, rental prices grew by 3.9 percent over 2016 and core-CPI rose by 2.2 percent resulting in a 1.7 percent increase in NAHB’s Real Rent Index. 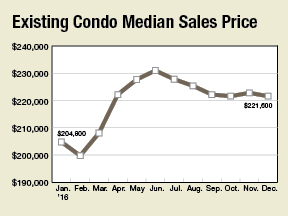 In December 2016, sales of existing condominiums and cooperatives fell by 10.3 percent, however, over the year, the number of sales in 2016, 614,000, was 1 percent higher than its level in 2015, 608,000. Regionally, the 1 percent increase in condo and co-op sales nationwide reflected gains in the Midwest (5.1%), the West (2.7%) and the Northeast (0.9%). However, sales in the South fell by 1.1 percent in 2016. Meanwhile, the inventory of existing condos and co-ops fell by 8.9 percent over 2016. There are 194,000 condos and co-ops in inventory. Since the pace of sales growth, which was positive, exceeded the rate of inventory growth, which was negative, then the months’ supply, which represents the number of months it would take to exhaust the existing condo and co-op inventory at the current sales pace, fell, dropping by 6.3 percent in 2016 to 4.5 months. Consistent with sales growth and a shrinking inventory, median prices on condos and co-ops nationwide rose by 5 percent to $221,200 in 2016. 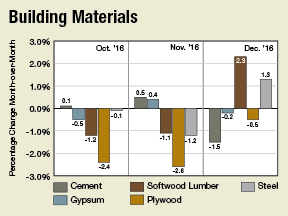 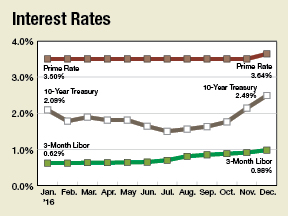