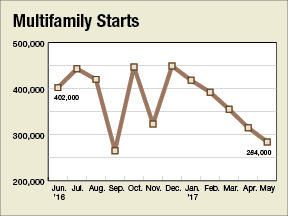 According to the U.S. Census Bureau and the U.S. Department of Housing and Urban Development, starts of buildings with five or more units, measured at a seasonally adjusted annual rate, fell by 9.8 percent over the month of May 2017 to 284,000, its fifth consecutive monthly decline. Over the past 12 months, starts of five or more unit buildings declined 25.7 percent. The annual decrease recorded in May is the third consecutive decline and each decline has been progressively greater. The annual decreases may partly reflect weakness in the multifamily sector as well as some pullback following stronger gains during the December 2016 to February 2017 period.

The headline consumer price index (CPI) fell by 0.1 percent over the month of May, reversing the 0.2 percent gain that took place in April 2017. This is the second monthly decline in the last two months. The reversal partly reflects a changing trend in energy prices. Over the month of May, the Energy Price Index decreased by 2.7 percent after rising by 1.1 percent in April. Meanwhile, food prices rose by 0.2 percent in April, similar to its monthly increase in April. Excluding historically volatile food and energy prices, “core” CPI rose by 0.1 percent in May. Shelter prices, which are the largest consumer expenditure category, grew by 0.2 percent as rental prices, a component of the shelter index, grew by 0.3 percent in April. Since the increase in rental prices exceeded the growth in overall inflation, as measured by core-CPI, then NAHB’s Real Rent Index rose over the month, increasing by 0.3 percent. Over the past year, NAHB’s Real Rent Index rose by 2.1 percent. 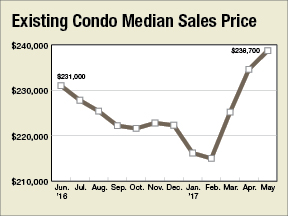 In May 2017, sales of existing condominiums and cooperatives rose by 1.6 percent to 640,000 units. Regionally, the 1.6 percent increase in condo and co-op sales nationwide reflected a 6.7 percent rise in the West and a 3.6 percent increase in the South. Meanwhile, sales in the Midwest fell by 11.1 percent while sales in the Northeast were unchanged. The months’ supply of homes was unchanged at 4.2 months. Median prices on condos and co-ops nationwide rose by 4.8 percent over the past year to $238,700 in May. Median prices in the South rose by 7.9 percent while price growth in the other three regions of the country lagged the nationwide rate: Midwest (4.1%), Northeast (3.3%) and West (2.7%). 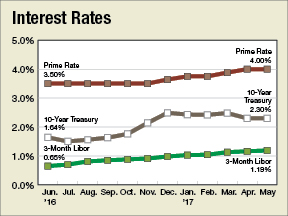