An infamous Inwood, N.Y., building was severely destroyed and at risk of collapsing. As of Thursday, the major rehabilitation of 552 Academy Street in Inwood was officially completed. 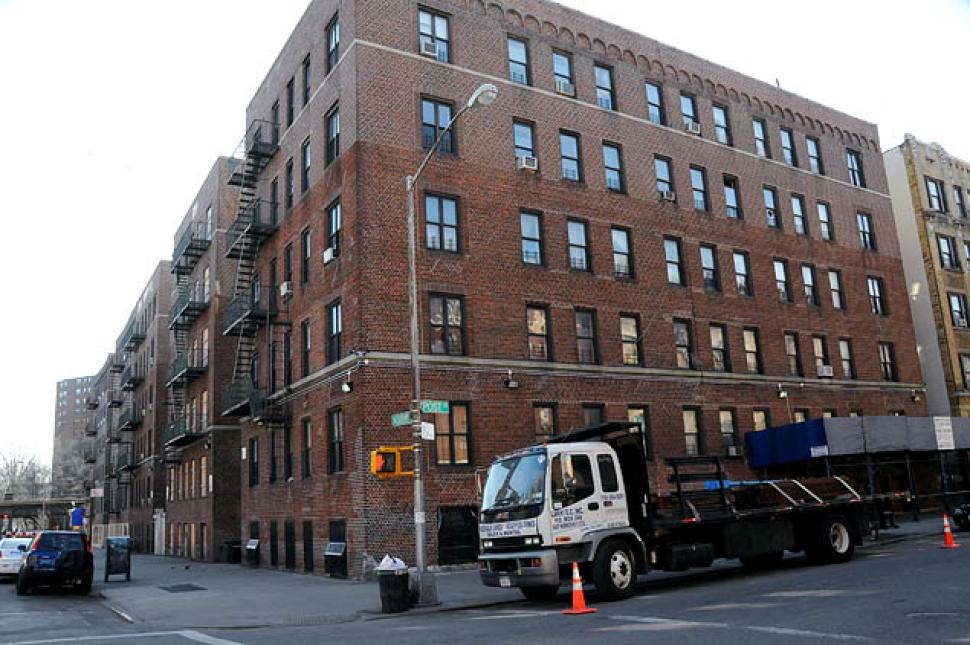 With the extensive renovation and upgrades completed in the 72-unit building, the families, who were living in awful conditions under the old ownership, returned to newly refurbished apartments at affordable rents. The City-sponsored rehab project also included amenities that didn’t exist before renovations, including a new elevator and a community room.

“Preserving our housing stock, keeping families in their homes, and safeguarding affordability is central to HPD’s mission of creating strong and vibrant neighborhoods. The rebirth of 552 Academy exemplifies our commitment to this mission, but it’s also a story of the strength and perseverance of the tenants and community who refused to give up,” said HPD Commissioner Vicki Been. “Working with our partners we were able to stabilize the building when portions were in danger of collapse, find temporary apartments for the tenants, and provide the financing that helped to transform this once derelict property into a place the tenants can be proud to call home.”

“What a joyous occasion for the long-suffering tenants who have returned to a beautiful building where they can live safely, securely and affordably, and for this community and its residents, who no longer have to contend with a blighted eyesore in their midst,” CLOTH Executive Director Yvonne Stennett said. “With our development partner Alembic, and with the support of HPD, Council Member Rodriguez, Enterprise and Capital One, we have written a new chapter for this building and this community.”

In 2011, The City vacated residents of 552 Academy because of directly harmful conditions created by years of neglect by the previous owner, including structural issues that made it susceptible to destabilization. Following the evacuation, HPD, Council Member Rodrigues, CLOTH and others came together to temporarily relocate the residents, secure the building, find a new owner and raise necessary funding to gut the property and ensure the rights of the residents to return home upon completion.

Through a joint venture with Alembic, CLOTH, a Washington Heights-based community nonprofit, transformed the property. HPD’s Office of Preservation Finance assisted the financial plan of which CLOTH and Alembic were chosen as the development team. The gutting included three major additions supported by Councilman Rodriguez: supplies for the installation of a future green roof, a new elevator line to what previously was a walk-up building, and a new community facility space. Additional renovations included mechanical, electrical and plumbing upgrades, new boilers, common area repairs, window and door replacements, new kitchens, and new bathrooms.

“We were proud to join once again with our longtime partner CLOTH in this challenging and critically important effort,” Alembic Principal Mark Reed said. “We also are tremendously appreciative of our many financing and technical support partners – Enterprise, HPD, Capital One and others – who stood by us even as further investigation and initial demolition revealed just how fragile and unstable the building had become. It was a challenging project, but, as we see today, a rewarding one as well.”

“552 Academy Street is much more than its 72 rent-stabilized apartments; it’s a noteworthy model for revitalizing neighborhoods and preserving communities through public-private partnerships, as well as a source of inspiration for other residents in neglected buildings throughout New York City,” said Judi Kende, vice president and New York market leader, Enterprise Community Partners, Inc. “Congratulations to the 31 families who fought hard to save their beloved homes and their community, the 41 new families joining this safe, green, and affordable development, and our partners CLOTH, Alembic, HPD, Council Member Rodriguez, and Capital One for working together to make this day of celebration possible.”

552 Academy’s former owner was also responsible for the known Ocelot portfolio of severely distraught buildings in the Bronx. The property was bought at the height of the real estate bubble with an unbearable debt, then descending into a physically and financially distressed state, making tenants live in insufficient and unsafe conditions. In December of 2009, the tenants, with representation of the Legal Aid Society and HPD’s Housing Litigation Division (HLD), acquired an order from the Housing Court selecting Yvonne Stennett of CLOTH as the 7A Administrator for the building.

In February 2011, an order was allotted by the City’s Department of Buildings to vacate tenants due to the conditions. More than 1,000 open housing code violations were issued by HPD’s division of Code Enforcement. Many units had no heat or gas, the building had unreliable water service, and residents lived in constant fear from public drug dealing, prostitution and crime in the building. 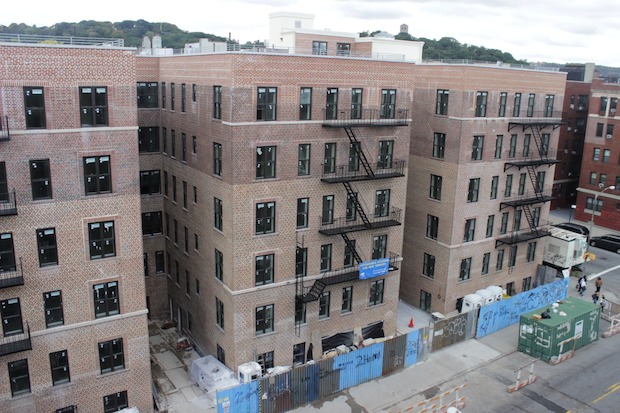 Once the order to vacate was issued, HPD’s Emergency Housing Response and Client and Housing Services divisions worked with Councilman Rodriguez, CLOTH and others to arrange temporary shelter and support services for residents such as off-site registration, intake services, public benefits advocacy, and moving and storage coordination. HPD staff worked to salvage the structure by demolishing, restoring and rebuilding an entire section of the real wall and installing interior bracing throughout the building which prevented a full-scale demolition.

A change in building ownership was crucial to move forward with any finance or rehabilitation plans and help tenants of 552 Academy Street. HPD’s Housing Litigation Division was actively contesting against the owner in Housing Court for years, obtaining judgments for civil penalties in $200,000 and for further civil penalties and contempt with civil penalties in the amount of $210,250, placed as liens against the property when the owners failed to pay them. Following thorough negotiations, HPD managed to leverage the work of its past litigation and obtain an agreement from the owner to transfer the property to CLOTH in exchange for HPD not enforcing outstanding judgments against them. With the placement of a new owner, all partners joined forces to carry out financing and rehabilitation plans to restore 552 Academy Street and give tenants long-awaited safe, affordable housing.